Our games don't show up in iOS search

Something strange on iOS search is that if you search for “faerie solitaire” neither of our games show up (I’d expect the games to be the first results like they are on Google Play), but other games by other developers do… You have to search for the exact title to find our games.

Anyone know of a solution for this? I’m tempted to test buying ads for our own game name but that seems like something that should not be required…

Hmm, could it be something missing in the application meta data or Info.plist?

it’s because the app store ranks other games with faerie and solitaire terms higher. Too common words.

it’s because the app store ranks other games with faerie and solitaire terms higher. Too common words.

The second result is a “Spades *” game, so I don’t understand how that ranks above a closer match to “faerie solitaire”. “‎UNO!™” is the 8th result, the search results are nonsense on iOS it seems. Unless the full name of the games are entered, but in that case if “faerie” and “solitaire” were too common it should still have the same issue? 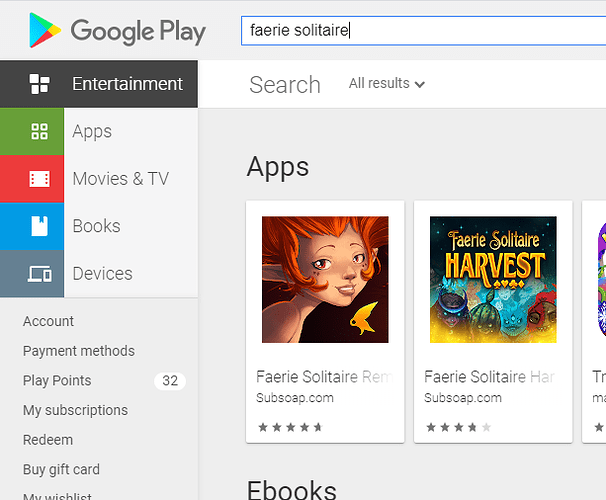 Hmm, could it be something missing in the application meta data or Info.plist?

Not sure if that is used on the App Store. I’m going to try and contact Apple again about this (first time a while ago they told me to buy ads for our game names… which I’m actually going to try doing too…).

Years ago our old app had no problem ranking for its own name.

Got a reply from Apple already. This time they said they cannot guarantee search results for the partial names of our games and that they can’t really help because their search method is based on Apple-confidential algorithms. I’m thinking their search results have a similar problem as “More like This” has on Steam.

I’m going to test making the first two keywords the franchise name and its most common misspelling the next time I update the two live games.

Wondering if adding special character to the app title would help. As ugly as it would look, having the names be for example “Faerie Solitaire (Remastered)” and see if that somehow better works. I may test that after the keyword changes.

I setup some ads for FSR and FSH on iOS store, no data so far. I’m testing Basic for FSH since that version is premium and set the CPI to $2. Advanced for FSR. I’ll share info on if anything happens with that as it could be useful for others here in the future.

Made the decision to take the name from the old (not live) app and give it to the FSR version so once the next update to FSR on iOS is approved it will just be “Faerie Solitaire”. If this works I’ll rename FSH to something else too maybe using a : or - or – or separate the franchise name from the edition name. App names are unique on iOS and even hidden app names keep the name reserved as far as I know.

Nothing on the Search Ads yet. FSH is a premium game, costs $9.99 to buy on iOS so maybe that’s part of it. Maybe Apple puts free and premium apps in different buckets? Maybe we’re competing with other paid apps which have CPI of $10+. Or Monthly Budget is too low for it to do anything. Or it’s too soon to see anything. Since it’s a paid app, if it is possible to get a meaningful amount of installs vs cost to get them then it’s a good idea to leave it running even if total installs from this is low. But I have a feeling we’re competing against F2P/IAP whale hunters and surfacing for normal premium apps in Search Ads will be very unlikely. Going to leave it without changes for now. 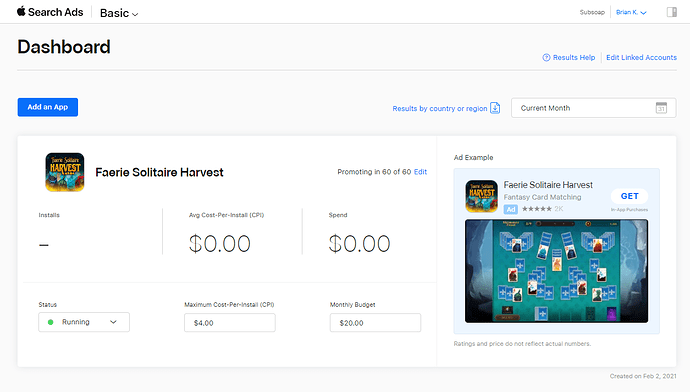 Nothing on the Advanced site either, no impressions (all bids on keywords $2 Max CPT Bid). Targeting 12 keywords for FSR for the exact spelling of the name and then some spelling variations that were suggested. I don’t know if it’s too early to see anything, or if the bids are too low, because other games do show up for most of the terms. They could be targeting and bidding on the keywords, or they could be Basic setups with very high CPIs set.

Those other games are made to make it possible for people to spend thousands in a single game so they can afford to spend those big numbers for targeted ads like that. Devs will often spend way more than seems sane when they are trying to do everything they can to go up in the ranks too.

If changing the app name to “Faerie Solitaire” for FSR works to make it show up I may disable its Advanced ads except for the misspellings, don’t know yet.

Apple gives you $100 if you add a payment method to Search Ads. I’ll continue to share what happens here.

Having more keywords in title helps with the search by these additional terms.
Premium games have too little traffic and installs, hence very low ranking compared to other games.

New update passed review for FSR, now FS on the iOS App Store. Hopefully will see a search change in the next week.

This update took just under 14 hours from being submitting to being approved / Ready for Sale.

Having more keywords in title helps with the search by these additional terms.

I’ll test that for FSH though I know it’s an upward battle maybe there are some keywords I can target. I’ll rename it to like “Faerie Solitaire: Harvest - Keyword Keyword Keyword” I will test it on future games too.

It is frankly embarrassing that Apple encourages ugly names like these. 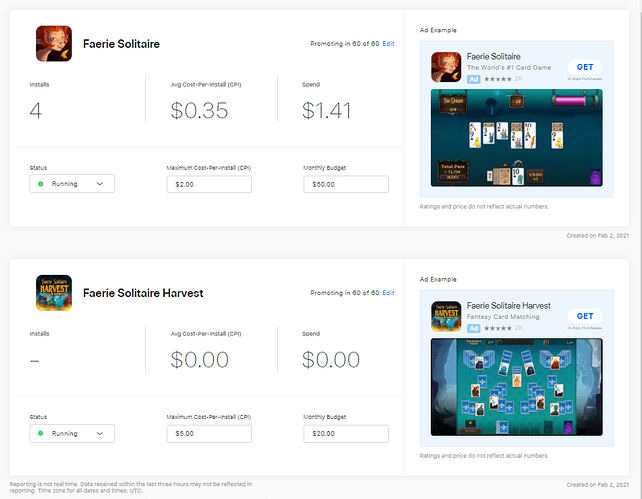 2021-02-07 23_36_12-Window.png1920×174 20.1 KB
All of the advanced ads are related to FS as either a direct version of the name or a spelling variation including typos. So far only exact keyword matches of “Faerie Solitaire” have gotten clicks. It’s low volume which explains low spend, but at least people can find our game with ads… I may test other keywords unrelated to our game’s name in the future but this probably won’t be a priority as the main thing I want to solve is our game showing up at all when people search for our games. When I test searching for “Faerie Solitaire” on my iPhone I do see ads for the game sometimes (I am probably half of the impressions) but most of the time 9/10 it’s other games. If they are not targeting our keywords then it’s probably the Basic version of Search Ads that’s simply outbidding us, and we’re given some mercy sometimes for actually targeting the keywords exactly.

“Faerie Solitaire” is now in the dropdown autocomplete but on my old iPhone it still does not show the game even though it’s an exact keyword match. Maybe just needs more time.

Something which might help would be to add portrait screenshots of some type, like artistic ones with game screenshots and other key art. Even though I prefer real screenshots, just having portrait ones on the store of some type may help.

Neither game shows up on iPad 2 app store search for “Faerie Solitaire” still. The store probably just needs more time to update fully for at least one of the apps with the exact name to show up - I hope. I would expect some change by the 28th on search results based on estimates posted elsewhere.

Update on advanced ads. Maybe the budget being low is hurting it but I’d still expect the budget to get spent fully by this time.

Basic ads. These have higher budgets but still can’t manage to spend them. I tried upping the FSH (paid app) max CPI to $10 and still zero installs. There’s no transparency to see impressions for Basic ads as far as I know. I tried to increase the max CPI for FS/R too and it sort of had a result. 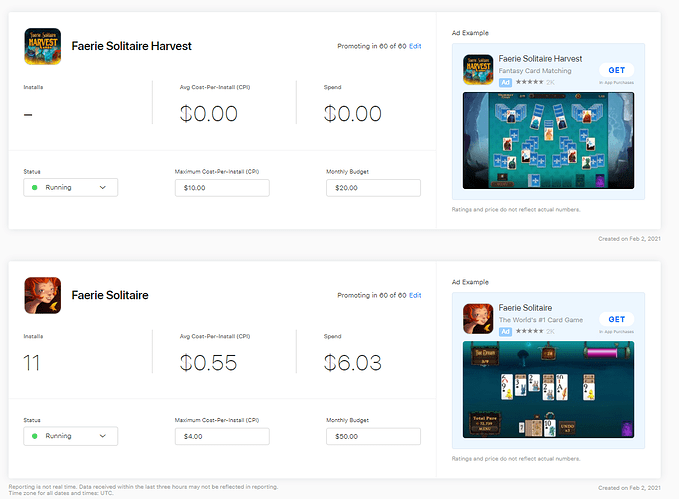 I will try to reach out to the owners of some apps running iOS Search Ads and ask them about their experiences with spending / installs / CPI.

FS/R still does not show up in search for its exact app name. Until it does (if it ever does) this rename actually has hurt its visibility because at least before FS/R showed up in search when it was named fully as FSR when you clicked the name in the drop down, now it doesn’t show up at all when searching for it unless you go directly to our publisher page.

Thought this information might be somewhat useful to you. Note that I am in the UK, not US, if that is useful information.