(Placeholder top post for a new project! Read second post to find out what happened to the old one.)

To stay up to date with this project and gain access to development builds, subscribe to my newsletter!

GAME DESCRIPTION
You control a generation ship, tasked with exploring the galaxy and colonise habitable planets. You are presented with a node based screen of “destinations”, each of which have some sort of effect. A research station might bring you some extra fuel, or you might pick up some extra crew at a trading outpost. Choosing wisely is important since you need to make sure you don’t run out of resources on your journey. Going to every destination isn’t an option, either, as you risk running out of fuel. Even if you don’t, the longer your journey, the more harmful mutations will crop up in your crew.

As you journey, your ship will improve with new research discoveries. On the other hand, crew mutations and traumatic experiences will make your journey more and more precarious. As you venture further into the dark depths of the galaxy, your destinations go from mundane to mysterious and sinister (think space anomalies, alien life, space monsters…).

There will be meta progression - unlocks of things like new ship types, research skills, destinations, biomes, etc. The game would be suited well to a “daily challenge”, a seed based run with leaderboards identical for all players.

Shortly after the launch of Fates of Ort, I began planning and prototyping the new 8BitSkull project. A game about a small crew of aliens on a centuries long journey, dealing with crazy genetic mutations. I still believe the core of the idea is sound, but will not be taking it further at this point. This is for two reasons:

I spent a lot of time pondering what to do. I still feel drawn to the concept of generation ships and space exploration. However, the game I have come up is radically different to the initial plan. The game is significantly simpler, which hopefully leads to multiple benefits: First of all, it makes the game more feasible to complete. Secondly, it allows for more resources to be spent polishing the mechanics that make it in the final product. Finally, when done properly, there is depth and elegance to be found in simplicity (think of the old adage “less is more”).

WHAT ARE THE INSPIRATIONS?

We have drawn upon multiple sources of inspiration. From ‘FTL’, we borrow the node based space traversal, hopping from one event/encounter to the next. We also keep the sense of urgency in balancing resources (think hull, fuel, life support, crew population). ‘Reigns’ also has this resource balancing act, and the simplicity of player input (basically swiping a card left or right) is something we are learning from as well. We want the game to be extremely easy to pick up, but have enough depth to remain engaging for a long time. Finally, ‘Luck be a Landlord’ does a great job of distilling the roguelite experience down to its very essence, something we would like to achieve as well. The interesting combinations of skills creating wild synergies is also something we would like to emulate.

YOU HAVEN’T ACTUALLY DESCRIBED THE GAME…

WHEN CAN I PLAY?

Not yet! We’ve basically had to start over from scratch. Even though it won’t be particularly exciting, we have begun the journey towards the very first build.

Some extreme WIP videos coming up!

First functional traversal. In the actual game you will only be able to move to destinations (white blobs, currently).

I will simulate the outcome of traveling to a given destination. This is revealed when hovering over it (see bars changing in bottom right). This was a huge bit of progress that I was dreading to implement, but it worked easier than expected!

I harvested the radial UI component I made for the previous iteration of this game. Here’s a placeholder selection process for a ship tech upgrade:

Looks great! (And I love that you’re using the Dear ImGUI extension for prototyping and debugging!)

Thank you! Dear ImGUI is extremely useful for prototyping, would recommend. And honestly, if I was developing for desktop only I’d seriously consider using it for actual input and UI (depending on the game of course).

For this game I want to get it on the Switch so Dear ImGUI isn’t suitable for input, hence the radial selection menu.

Tweaked the tech upgrade screen a bit to show how it can be easily customised to go for a different feel. I’ll probably end up removing all the elastic animations, they’re a bit too silly for the mood I intend for this game.

I have added an outline to highlight the destination currently selected by the player. Lots of juice can be added still I am sure, but it’s a good foundation. Placeholder graphics, of course.

(Edited to update with fadeout animation)

Started working on the HUD. Displaying the projected impact of traveling to a destination. This is a huge bit of progress! It will be super important to clearly display what the outcome of a decision will be.

Just a small update today. Implemented Richtext to display projected values for stats that are numbers only (rather than bars).

Since the extension supports loading images in the text, I will most likely end up replacing “->” with images like

Experimenting with a popup tooltip instead of displaying all relevant information around the destination itself (see previous post) because i think it will get cluttered trying to do it that way. I’m sure this mockup could be arranged better by someone with an eye for design, but I wonder what you all think about something like this in principle? It would spawn on the opposite top/bottom of the destination you’re hovering over. 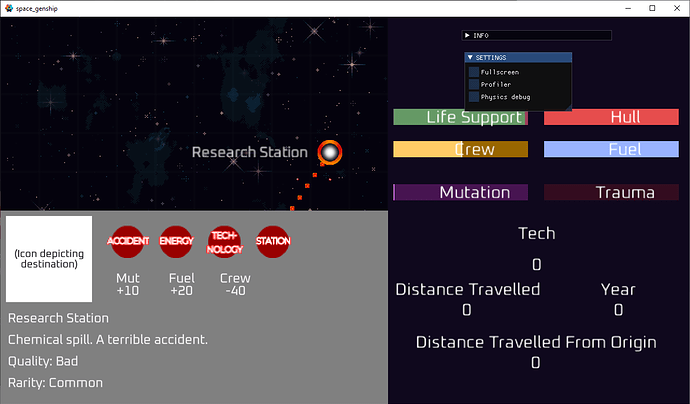 I wonder what you all think about something like this in principle?

I don’t mind a popup tooltip. It’s likely quite a bit more flexible and it will give you more room for important info.

Destinations have a few parameters that I want to display:

I think I can get rid of the explicit “quality” display by tinting the background (already doing this - green for good ones, grey for neutral, red for bad). I also think I can get rid of the rarity display by doing something like adding a fancy border to the destination icon (currently placeholder). A common destination would have a normal border, whereas a rare one would, for example, glimmer blue or something. I won’t bother implementing that at the moment as it won’t add anything to this prototype. I’ll wait until it’s time to add some actual graphics instead.

What kind of impact will this have on gameplay?

Very minor. So far, the only ideas I have are:

Suggestions and feedback are always welcome, that goes for everything in this thread!

I’m just thinking what the difference between quality and rarity is in terms of impact on gameplay. I do understand that a rare destination isn’t necessarily always a good destination, but I wonder if it complicates things too much?

Yes, that is a fair point and it’s possible that you’re right. The way I see it:

Pros:
It adds two dimensions to differentiate destinations, both in terms of flavour and minor gameplay aspects

One of the lessons I (claim to have) learned from Fates of Ort is the value of scrapping things that don’t work, even if that means throwing away “good” work. I think, in the drastically different ways this project has taken shape already, I’ve shown a willingness to be open minded and flexible.

This is a long way of saying: I’m going to try and implement both rarity and quality, and see how it goes. I think it will work, but if I see evidence that it’s confusing or that it doesn’t add value, then I will happily scrap both values or combine them into one.

I do suspect that how it’s implemented visually will be the crucial factor about if it ends up being confusing or not, so we’ll see how we manage that once it’s time for graphics.

Anyway, thank you for the suggestion and please keep them coming!

This is a long way of saying: I’m going to try and implement both rarity and quality, and see how it goes. I think it will work, but if I see evidence that it’s confusing or that it doesn’t add value, then I will happily scrap both values or combine them into one.

I’m excited to see the direction this project is taking. There’s a lot of exciting stuff that’s possible in this kind of sci-fi setting.

Implemented a basic system to announce when specific skills have been triggered. Feedback (i.e. what effect your actions have had) will be crucial in the experience for this game. Accordingly, I want to show the player when the skills they’ve selected actually do something. If your Fuel bar suddenly goes to max but you don’t know why, I think there’s a missed opportunity to highlight that it was your decision that made it happen.

In this example, I have two test skills implemented: “Reinforced plating” (which increases the ship’s max hull stat) and “Machine learning” (which increases Tech earned at destinations). It’s important to note that “Reinforced plating” is actually a bad example to use here - in the actual game I won’t be displaying this skill since it is automatically applied all the time.

During a journey, these announcements will trigger at the point that the skill is used. So in this example, “Reinforced plating” triggers immediately (since it’s always active) and “Machine learning” triggers when you arrive (at a destination that gives you Tech).

Added numbers to the bars in the HUD.

I’ve also implemented quite a few basic Tech skills. Getting closer to a playable 0.0.1 build! Need to implement a few more skills, add some mutations and traumas, and we’re good to go!