Moved Spine support from engine into an extension - Breaking change!

The biggest change this sprint is that we’ve now moved the Spine from the engine itself, into
extension-spine.

Apart from adding the dependency to the extension, there should be no other changes needed by the developer.

This is a big change, and we’ve worked many months to put all the pieces together.
If you encounter an issue with this release and your project, please let us know!

Breaking change!
Use new path to the Spine material folder /defold-spine/assets/ instead of builtins/materials for all the spine models in your project.

This sprint we’re also officially releasing the first beta version of the extension-rive.

The actual rive implementation is also still under development, and there are still things to solve, but we feel it’s time for our users to be able to play around some more with it.

It supports playing regular animations, as well as statemachines and controlling the state machine inputs.

Since the available open source tools sometimes doesn’t work out of the box with the Apple software,
we have decided to use dedicated macOS build servers for macOS/iOS builds for the time being.
As a Defold user, you don’t have to configure anything, our regular servers will redirect to the builds automatically, and your builds should work as usual.

Note however, that you might need to update your extensions, as they’re now building on a different OS with a different compiler.
E.g. extension-facebook (release 6.3.1) has had a build fix for this case.
If you run into an issue, check if you’re using the latest extension version, and if you do, ask us here in the forum for help.

We’ve added sys.serialize(table)/sys.deserialize(buffer) (used internally in our sys.load()/sys.save()) functions for the cases where the developer uses custom functions to store or retrieve data.

We’ve added a fix for our builds using bob.jar that optimizes memory usage (at runtime) for each component type by calculating the number of instances needed for each type (if not using factories).
This allows us to also optimzise the running performance for component types if the collection doesn’t contain the type at all.

Also, we’ve made some smaller typos and fixes in the documentation

We are now working on implemention a Spine extension that supports the official (latest) Spine runtime.

We are now working on implemention a Spine extension that supports the official (latest) Spine runtime.

This will be really cool as there are many features the official Spine runtime supports that have not been possible to use for a while. It will open doors for complicated effects!

Great improvement!! Thanks for your hard work!!

I’ve gone back to the same project to make a new build and wanted to test the game locally in the editor first. I now get this error on CMD + B with Defold 1.2.184:

Update: Bundling to Android works, just not building with CMD+B.

the fastest and the simplest way to fix it is to update Defold to the latest version or at least 1.2.187

Thanks @AGulev. The reason we’re still on 1.2.184 is described here. I’m downloading the latest and greatest Defold now to see if it that issue is now fixed.

Latest Defold uses MacOS build server. So if it was the solution for your problem, so now it’s should be fine.

I’m afraid the Gamecenter errors still happen when building (CMD+B) with Defold 1.2.188. The errors are listed in this post and appear to be identical.

UPD: Sorry, I need to take a look closer to this issue. I’ll do it later.

I have some problems fetching new spine extension. I’m using such link to do so: https://github.com/defold/extension-spine/archive/master.zip 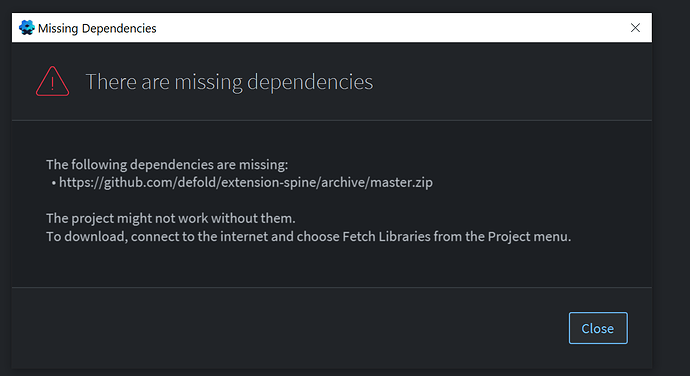 If I fetch from the editor, nothing happens. Just in case I added facebook extension and tried fetching it. Everything was downloaded correctly.

Not sure if github has changed their layout of links?

If I copy the “Download Zip” link, I get

Edit: @Pkeod noticed it was a copy paste error in our documentation that mentioned “master.zip”, whereas this is a new github repo, which has the new name “main.zip”:
https://github.com/defold/extension-spine/archive/main.zip

Yep, that was the case. With main.zip everything is fine. Thanks.

UPD: Sorry, I need to take a look closer to this issue. I’ll do it later.

I’ve started porting extension-gamekit (by Animonger) to extension-gamecenter (by Dragosha). This is likely to solve the issue, right? I think it’s the right thing to do, because the Animonger extension is currently not maintained.

I’m back with another issue)

When bundling the project I got this error:

Should I create issue on github as well?

When bundling the project I got this error:

I also got this error just now when bundling to iOS.

Breaking change!
Use new path to the Spine material folder /defold-spine/assets/ instead of builtins/materials for all the spine models in your project.

Correct, we’ve moved the material from the engine to the extension.

This error from the extension itself. It is trying to use builtin material, which is no longer there.

Correct, we’ve moved the material from the engine to the extension.

This is a reference issue within the extension itself; 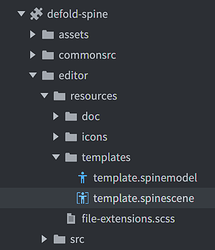 @totebo @russelkgd I cannot find a reference to builtins material

I recall fixing such an issue some week ago.

Which version of extension-spine are you using?