Surprise! I’m announcing Void Scrappers - a top-down space horde survival shooter. In Void Scrappers you blast hordes of alien ships into junk, then collect the scrap to upgrade your ship into an unstoppable force of destruction. You can unlock new characters and weapons and upgrade your stats between runs.

I expect to release later this year - perhaps October/November. 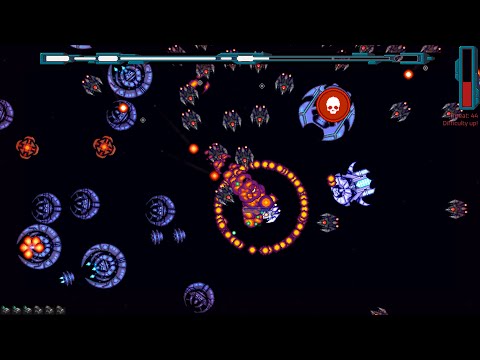 I didn’t intend to do it in “secret”, it kind of just happened. Yes, the game is obviously inspired by Vampire Survivors. My itch to make something like this has been bugging me for years though, and was further exacerbated by @ross.grams excellent Rabid Robots.

PLEASE HIT WISHLIST HERE NOW: (and bask in the radiant glory of the algo boost

Looks great. The intensely gratifying gameplay footage in the trailer is something I would like to experience, wishlisted !

You say, you just created a benchmark for Defold’s 2D capabilities?

Are there any other platforms you plan to release it on too?

Yes, I am certainly bumping into some performance limits at times - but it’s most likely due to my programming…!

I will ask GOG, but they don’t even have Vampire Survivors so I’m not hopeful.

I’ll try and get it on the Switch too. There, I’m concerned about performance. I also don’t know if there’s an approval process for games on Switch once you’re “in”. Any insight there perhaps @britzl ?

Won’t be on mobile.

Surprise! I’m announcing Void Scrappers - a top-down space horde survival shooter. In Void Scrappers you blast hordes of alien ships into junk, then collect the scrap to upgrade your ship into an unstoppable force of destruction. You can unlock new characters and weapons and upgrade your stats between runs.

I’ll try and get it on the Switch too. There, I’m concerned about performance. I also don’t know if there’s an approval process for games on Switch once you’re “in”. Any insight there perhaps @britzl ?

There is going to be a review of the game itself to make sure it follows Nintendo’s content policy etc, but other than that, once you are an approved developer there should not be a problem.

That’s great news. It will be out on Switch at some point then too!

Some coverage is easy to get when you use Defold!

What you use for collisions? Box2d?

It’s so performant! Thanks @selimanac .

The first demo version is ready! It is playable in browser here:

I would love feedback and bug reports! Please let me know what you think.

If you haven’t already, please wishlist the full version on Steam now:

Game looks great, well done! Have played it and wishlisted it as well!

Amazing! I’m a big fan of this genre.
I really loved your options for weapons and the boss hunting mechanic. Wishlisted!

Awesome , really fun to play for a demo. Will there be support for gamepad controllers?

Thank you! Yes, should be already but I haven’t tested in browser. A Steam demo will be out in a few weeks to a month.

Yes, should be already but I haven’t tested in browser.

Pretty cool overall, here’s some playtest feedback for you:

Menus that wrap and can be used with mouse and keyboard!

The UI doesn’t seem to scale properly in fullscreen (may just be an HTML5 issue). 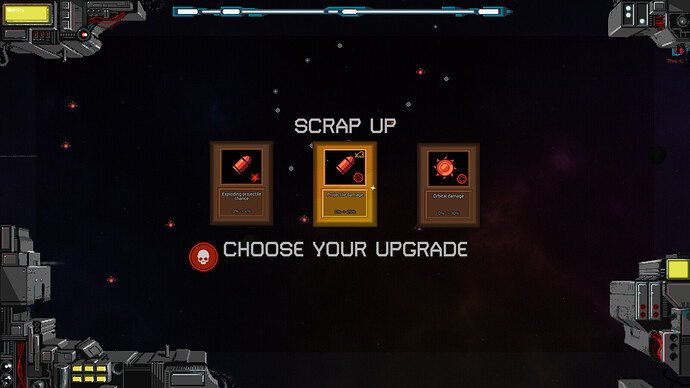 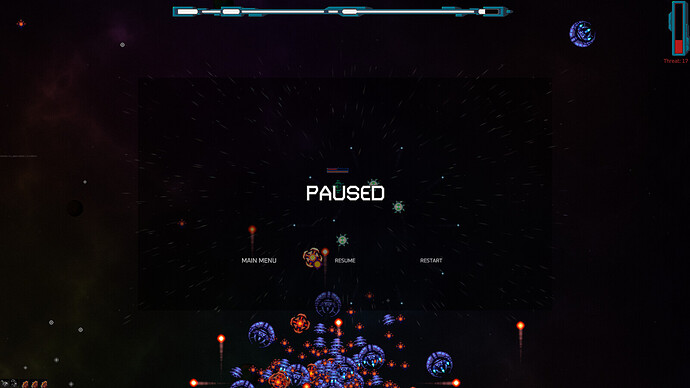 It’s a bit weird that you switch menu buttons on key release rather than press. It gives a “laggy” feel to the keyboard navigation.

I think some kind of tutorial is needed. I didn’t find out about the dash until an upgrade mentioned it, and then just hunted the keyboard for a few seconds to find it. Also there’s some upgrades that I don’t understand. The stuff about shields??? “Projectile cooldown”? Is that just your normal fire rate/delay between shots? “Explosion cooldown”? No idea what that is. To me, “cooldown” sounds like the delay between uses of an active ability that the player triggers.

No idea how to solve it, or even if it needs to be solved, but it’s a little bit weird in the very beginning, when you’re offered upgrades that you have no clue about (and that won’t even do anything until later), like “orbital damage” or whatever.

I don’t like the bouncy XP bar. It’s a bit annoying when it looks like it’s full because it’s bouncing around, but it’s actually not.

The “cards” could use some graphical work. I assume the text style is placeholder, and the card body/border design doesn’t really fit the sci-fi greeblyness of everything else.

When selecting an upgrade card, you don’t actually have to click on them with the mouse. If one is highlighted with the keyboard and you click anywhere, it chooses it. Also I would do the confirmation on key/button release, so if you press the wrong one by mistake you can correct it if you keep holding the button and move away.

The way the enemies jostle against each other is kind of jittery. When you get a whole mass of them (pretty much always), the ones in the middle jump around a lot.

I would add next/prev arrow buttons to the character select screen. It’s not obvious that you click on the little characters (they’re basically the lowest-contrast thing on screen anyway). I only found it by using the arrow keys.

On my first run when I really had a mass of guys piling up it definitely started slowing down a bit, but overall it ran well. I’m guessing that all the collisions between enemies was dragging it down, rather than the total number of enemies, since it ran fine later when I was killing the main mob faster (but there were a ton of enemies total).

, it gets stuck. It starts black, shows a slightly reddish-black screen, then goes back to black, and only shows the little version text on the top left, and doesn’t get to the menu. [Edit:] Actually I guess it does get to the menu, you can start the game with the keyboard anyway, but nothing’s visible.

, but these are all just little nitpicks/UI tweaks. Overall it seems pretty professional!

Coherent, actionable, well explained and thorough feedback… I want more haters like you!

Massively appreciate the kind words and the super useful feedback. A lot of it are things I can and will fix, so thanks!

I had my misgivings about bouncy xp bar, and I guess I was just waiting for someone to agree, so that will go.

We have two full time QA guys to get this kind of feedback! Pure gold right here.

Uhh, uh oh. Now I just feel bad for destroying the job market, because this only took me about an hour.

Alex, now don’t be shy about sending me my week’s salary!

You can’t be making more than the CEO, so the cheque will just about cover a cup of coffee.

…and don’t cash it straight away please.