Hello everyone, I just started my game development journey. Yesterday, while watching some videos about game design on YouTube, I found this video:

The method is so brilliant, and I keep wondering how I could do something like this in Defold. I might have gone ahead of myself since I am still a newbie, but I really cannot stop thinking about this. Does anyone know how to do this in Defold, or can it be easily done? 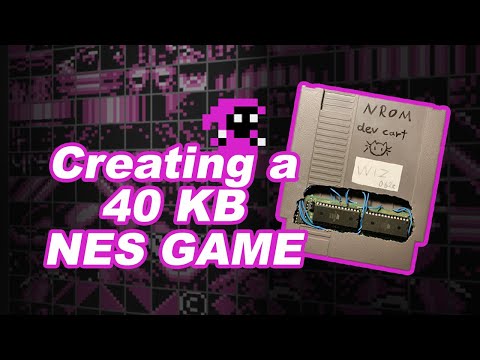 Yeah, that video is really cool and it is impressive what they achieved. But doing the same in Defold seems pretty pointless to be honest. Modern games are usually optimised in totally different ways and for different reasons than for the hardware of 8-bit consoles.

If you want to do this for fun and for the challenge then you can use Defold tilemaps to build the visuals of your game, including the player character, enemies etc. The end result will perhaps use a bit less texture memory, but will in every other aspect be less optimized and performant on modern hardware.

Thank you for the reply

Yeah, I just really want to know how to do this for fun.
Perhaps this would be more useful if the game’s visuals were 2D hand-drawn like Hollow Knight?

The method is so brilliant, and I keep wondering how I could do something like this in Defold.

I actually used this in my game a little bit, but I later found out it was totally unnecessary.

I think the important thing to remember here is that defold has many tricks which are just as cool. personally as a beginner I was impressed by how Atlases are automatically shifted to be square numbers. However, the plain truth is that those old tricks from the NES era are just not necessary any more.

A smart guy named britzl once told me that a 2048*2048 texture takes up only 16mb. I would guess that’s the same size as every super mario game on the nes and the SNES put together

It’s amazing how far we’ve come. Mario was released in 1985, so it has only been 38 years. Maybe one day I will be able to play real-life SAO, but without the getting trapped inside the game for years thing.

I think we have lived through a golden age of videogames. It’s hard for me to imagine what they could do to improve on the AAA titles that come out these days in terms of their narratives, graphics, gameplay, etc (regardless of whether you like them or not, they are truly impressive). Now with the influx of microtransactions and subscription services within games like mario kart, I believe that golden period has ended.

For me, N64 era was the peak of not only videogaming, but human civilization. Unreal Tournament, super Mario 64, tony hawks pro skater, the GTA games, Aliens vs. Predator, tomb raider, I could go on and on. Resident evil. Smash Bros. Perfect dark. Crash Bandicoot. I could go on. Even the SNES Mario games. Sonic on the sega mega drive. Ocarina of time. The arcade shooters with plastic guns. Time crisis II. On rails shooters like house of the dead.

The fact that the golden period of videogames happened to occur at the same times as my youth is, I believe, a complete coincidence and I am being totally objective about this.

house of the dead.

The fact that the golden period of videogames happened to occur at the same times as my youth is, I believe, a complete coincidence and I am being totally objective about this.

Yeah. That series didn’t reach its peak until Typing of the Dead was released in 2000.

The need for optimizing will always be there.
There will always be a need to push as much data through the CPU/GPU as possible, and also to minimize the download sizes.

Sure, some restrictions have been “removed” since some developers assume the players have infinite amount of internet speed, or memory, or CPU/GPU power.
But some restrictions are still there, you don’t have unlimited resources on a console, and you can’t easily upgrade them.

As long as you care about it, there will always be a need for optimizations.
It might not be easy bitmap tricks, but it could be about how you store your data in general to produce a large open world game or write a sound system to use as few sound resources as possible. Ofc, some of these things are tied to tools that are more available nowadays (e.g. FMOD).

The need for optimizing will always be there.

This is totally true and I remember watching a video about how no man’s sky used some clever visual techniques that made loading worlds seamless from the player’s point of view recently. But I meant rather from a creative perspective, rather than technical. That is to say, it’s hard for me to imagine what could come after an open-world game like GTA, for example. We are able to recreate an entire city (and other games recreate entire countries, universes, etc). I don’t know what else games could provide us with, and I’d be curious to know what others think.

Virtual reality, I suppose, is an obvious next step in terms of the “next big thing”. But personally I think that in time it will become clear that gamers actually want to be sat on their couch whilst they play, staring at a screen. The success of the mobile phone, for example, is more indicative of how gaming is going in recent years than any VR headset.

Improved AI or more closely integrated AI is another possibility for future progress in terms of how characters communicate with NPCs. But people are able to love and hate characters in books and films, for example, with whom they have no interaction. So I am not sure if greater AI is actually going to have a huge impact (artistically speaking).

Virtual reality, I suppose, is an obvious next step in terms of the “next big thing”.

This. Personally I’d like to see computer power increase until ray tracing becomes a standard on standalone VR headsets =D
Gameplay still trumps graphics for me though. I had a blast playing through Half-Life 2 again after long years, this time in VR. Meanwhile I still haven’t finished Alyx a year after buying it because the gameplay just doesn’t grab me. It looks gorgeous though.

What I find awesome is how improvements of both software and hardware make it much easier for indie developers to make stuff beyond the dreams of AAA studios of yesteryear. AI could help significantly in this regard - all the pesky stuff like creating graphics, models, animations… I can imagine all of that becoming a whole lot easier in the near future.

Can’t believe I forgot half life in my list of games!!