Following a suggestion of @Pkeod, I am posting here a minimal Defold project with a shader for drawing cubic bezier curves.

For any further info please ask here or on Slack.

Now that I have taken a second look at this after a long time, I see that the shader maybe somehow simplified. Lines 24–33 compute the coefficients a, b (two vec4) of the polynomials. These are constant along all vertices, hence it maybe moved back to lua code and one can have them as uniforms instead of pnt and tan (points and tangents). In other words, now the same computation is performed for each vertex (i.e. about 256 times for each curves) by the GPU, moving it to lua one has a unique computation each time the curve is changed but in lua. (I hope I have explained the point…)

Perhaps make this into a generalized module on GitHub?

I am sorry but I don’t understand…

The materials, model, assets, and helper scripts could be packaged into a generic library that others could include. It’s not necessary to do but it could be done.

I see. Only the bezier curve related part, not also the demo allowing you to move the points, right?

I am not an expert in creating such a module. But I may try.

What do you think about the GPU / lua options I was writing above? I remember being quite scared at that time about the lua performance; today I am way more confident about it! So I would prefer to move that computation to lua.

I encourage you to try the ideas you posted about!

You can put demos in a separate folder rather than the one that you designate as the library folder.

Check other projects for an example of how to set it up https://github.com/indiesoftby/defold-hyper-trails

This great! Thank you for sharing!

I was using this shader and made a library. Here is the github link.

Hello! I set position from the other ‘go’ in update function and see delay.
How fix this?

it is hard to tell where the problem is without any information. Are you sure it is a problem of the shader and not of your “general structure” of your code? Maybe you are using some message passing? 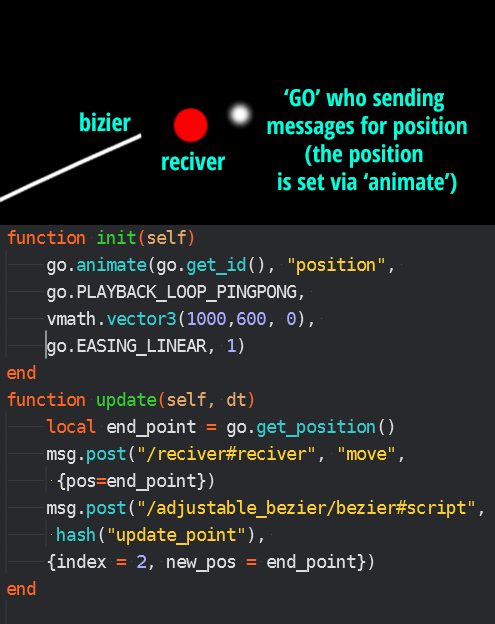 Thank you for sharing the project.

You are animating the end point sprite position via go.animate and you are updating the shader constants (to move the end point of the bezier curve) via a message.

I would say that the message is sent at the end of the frame and you will see the bezier curve end moved in the next frame. I am not sure about this but it is a possible explanation.

I would suggest that you update the end point sprite and the shader constants in a uniform way: both in the update function of the same script. Maybe you could animate (using go.animate) a script property and not directly the end sprite position.

I hope this could help!