One Step Behind (RPG-shmup thingamabob with way too much lore)

I just feel like documenting this thing somewhere at least so I can be able to thank the Defold community for being there the entire time, I guess.

The entire game was really supposed to be kind of a joke, and the way it started out (just as an idea between my friends and I) looks nothing like what it is now. We had ideas and thought experiments since 2015 or 2016, I think. The main source of inspiration then was Undertale, and we know that was a very good game. Oh, then the TouHou series. I pulled a lot of ability ideas and gameplay ideas from that.

No real work really even happened until earlier this year, when I went on a rampage on trying to find a suitable game engine to work my game, which went through a few names already: While You Were Away (which I’m going to be turning into something else), A Game Formerly Known as WYWA, Project W, etc. mostly because we had no real plot yet. (There is totally a chance that the name of the game becomes something different before 0.2 prealpha is even released at this rate, haha)

Anyhoo, the reason I finally landed on Defold is because

I
may or may not
am trying to make a video game on a potato computer. Erm, a computer that kind of is not good for this kind of thing? Also, I’m broke and not even out of high school yet? I don’t get to use money?

So, yeah. I went through a lot of things before getting here: GameMaker Studio, Godot, a few other things I don’t remember the names of. I would’ve used Godot if it weren’t for my computer’s sucky graphics card or something.

But yeah, it’s nice to be here~
I like this place very much, and I’m glad I’m here anyway~

Hello @ZaTimou! I look forward to following the operates of your game. 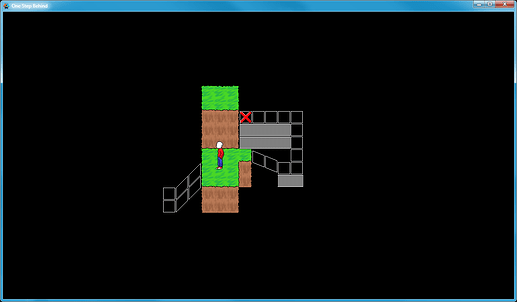 image.png1296×758 51.9 KB
Hoo-ray! Our first screenshot! (Ignore the faceless Slenderman-looking guy, he’s part of the lore and is our temporary player before I figure out character customization)
(Actually, this is kind of old already, being a few months old, but I haven’t shown you guys yet so this is kind of exciting)

Anyhoo, as far as development goes, I’ve got working warps (those are the crosses, placeholder things) and an almost working textbox system: 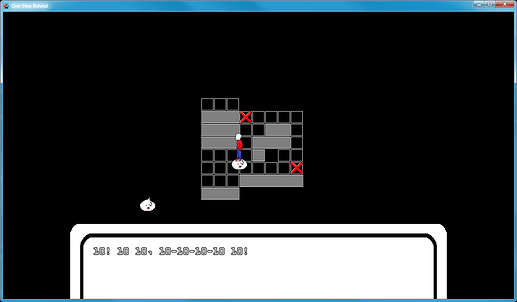 Anyway, it’s pretty exciting how far I’ve come, given that school is a sucker and kind of gets in the way. Oh well. All in fun and games~

(edit: oh I’m an absolute dope I forgot to show you guys the title screen! warning: not final probably) 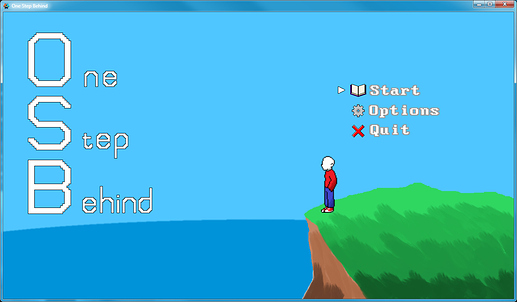 It’s been a while since I last posted anything about this, and I apologize for that.
But in that time I was away, I worked a bit more on the project and a little more has come to fruition~ 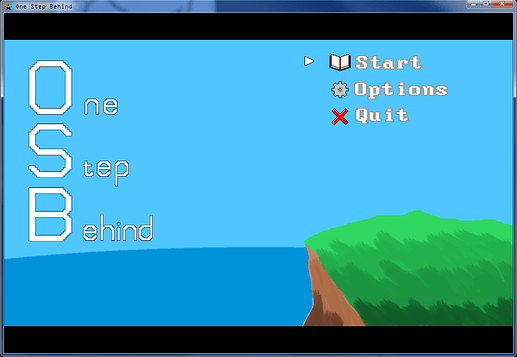 I also went and redid some sprites so we can actually look better and face up and down now:

Also the whole talking to Ten only once thing has been fixed, so that’s pretty cool. 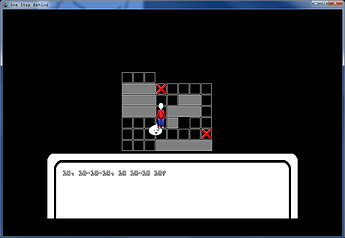 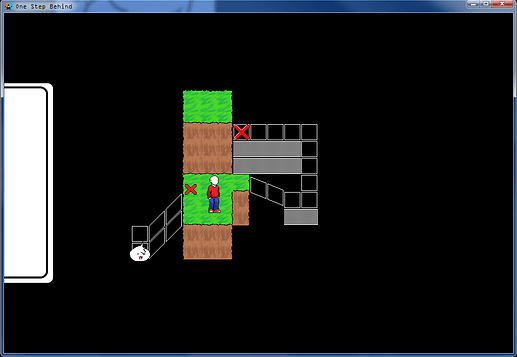 I also started work on one of the encounter systems that we’re going to have, which is Bullet Hell, which is basically a Shoot-'Em Up. (the other of them is the classic RPG thing, which is you stand on one side, the opponent on the other, you throw attacks at each other based on turns): 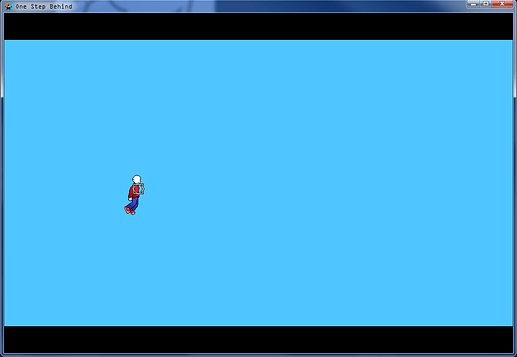 It’s pretty blank currently, but I have the basic movement and shot stuffs working pretty well.
Trig helps a lot. I love trigonometry.

Shots are kind of hard to see, but that’s because of the background. It will look better once I put some time into making backgrounds.

Anyhoo, that’ll wrap it up for this devlog. I’ll see you around, when I do a little more (and not forget to post).

But I have done some things, and I would like to show it off. : 3 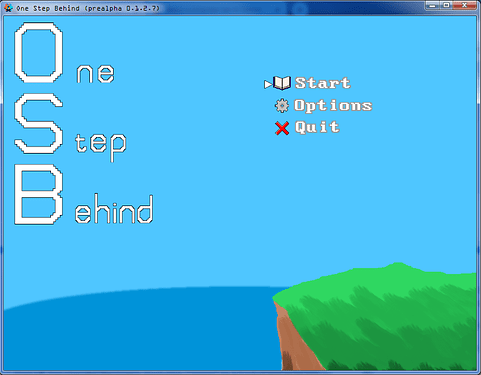 There’s also a chest to test inventory things that I have not worked on so it’s currently stuck at: 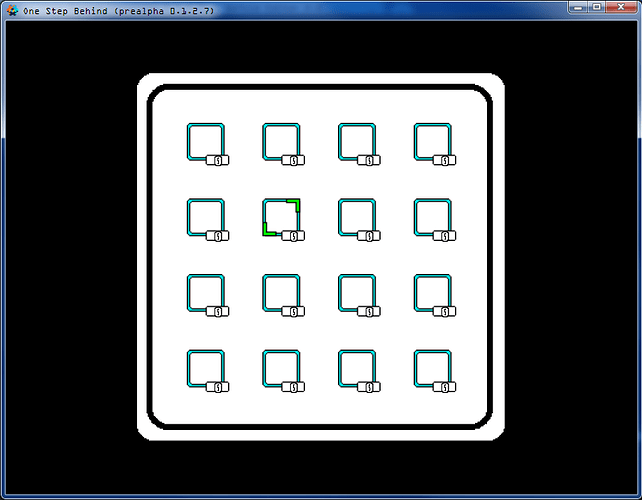 The Bullet Hell section isn’t so empty anymore, and I’ve got collision to work so I added some effects: 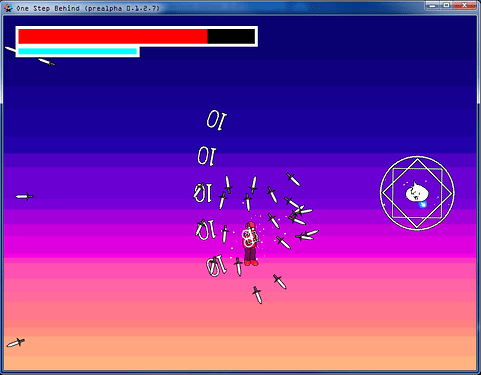 The player turns red when invincible after getting hit by a bullet.
Huge thanks to @Lecricreator for the progress bar source code!

Also there’s not quite a game over screen yet, but you can certainly die.

Thank you very much~!

And, yeah, it might become something interesting. However… I don’t think there’s going to be a full game release anytime soon (I’m thinking years). I will try my best for a demo in February 2022, but I don’t think I’ll make it. :P

Another small update from 11 days ago:
More game mechanics! :D

Airdashing is a thing. Pressing [C] will give you a boost in flight in one of the 8 cardinal directions. You aren’t able to change directions or influence the movement until you slow to a certain point. 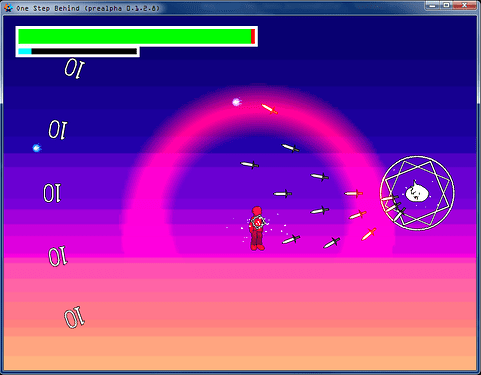 image816×635 78.8 KB
Also, whenever you get hit now, a red circle appears and closes in on you as you freeze in place, giving you exactly 15 frames to input airdash to parry the bullet.

You would then flash blue, a wave of white will expand from you, and bullets in a small area would then be absorbed: 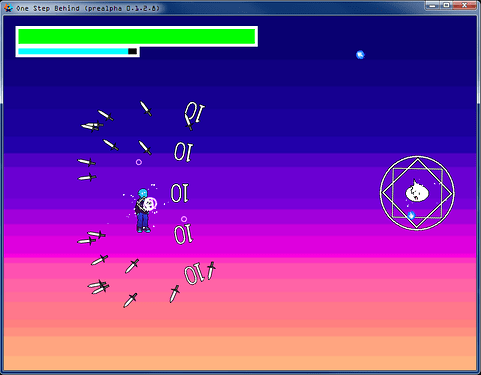 Parrying costs SP (I used funni debug key in order to set the max SP to 100), and running out will cause you to take damage (it won’t be the full damage value, but it’s still something). Without SP, you can’t parry.

Also I suppose you’ve noticed the green HP bar now (different from the red one before): 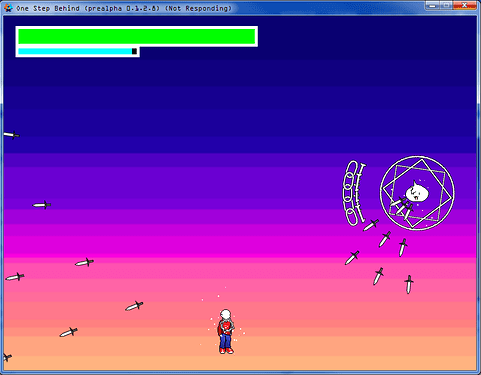 image816×635 65.9 KB
That is overflow HP. If you go beyond your max HP (only with certain items in the future, but for now limited to the debug key), a green bar overlaps the red one and maxes out at double the max HP.

Oh, and dying?
Since I haven’t found a way to do game overs and respawning from checkpoints yet, dying will just cause the game to close out and reopen. :P

If this is your first project, learning about gameplay is a great way to start. You can learn about collection proxies, which allow you to reload collections, at a later date.

So I am using collection proxies for everything, it’s just a matter of figuring out a good way to reload them.
Thank you for bringing it up, though!

Wowee, it’s been way too long since I last did anything here. But while I was gone, I did make some progress, although the demo goal of February 2022 is looking more and more unlikely. 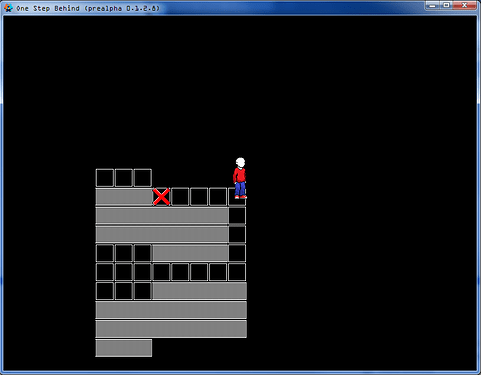 image816×635 28.8 KB
It was a very simple thing to do: just add an object for the camera to follow (I use Rendercam). But it does make the game feel a lot better than just staring at a static screen, I guess.

Textboxes (and other menu boxes) have a new appearance! 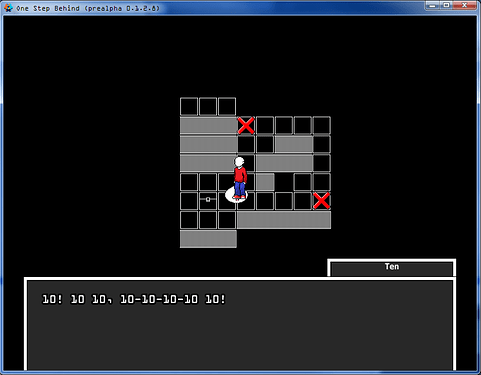 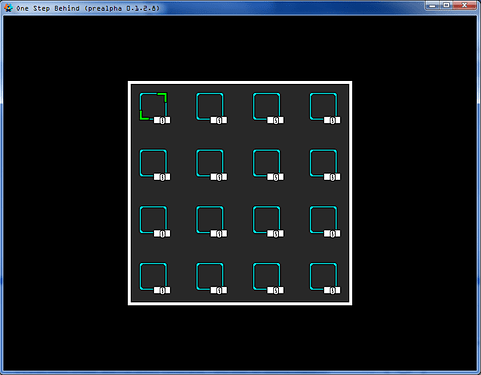 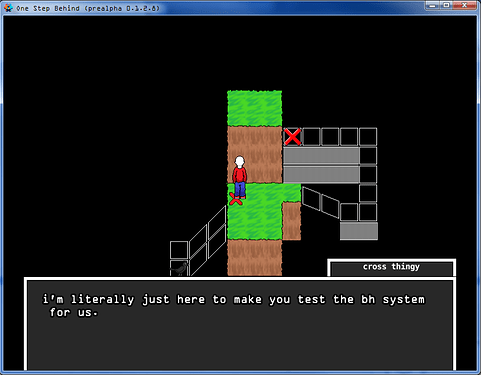 image816×635 64.3 KB
It’s a bit more simple, and I’ve added namecards. I also plan on adding character portraits, but for now that’s a work in progress. 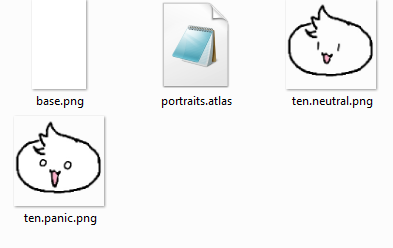 The Bullet Hell system has another update! 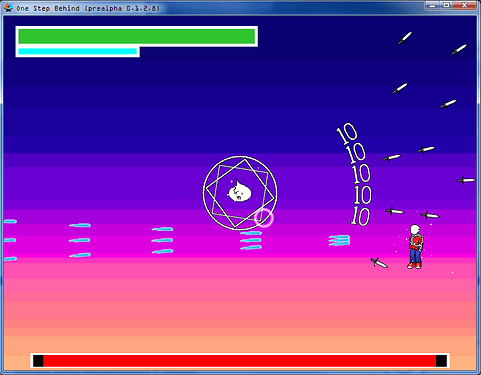 image816×635 70.1 KB
Going behind the boss will allow your character to turn around, facing the boss at all times. I mean, it really doesn’t make any sense to keep firing one way while the boss is behind you. :P
Also that red bar at the bottom is supposed to be the boss’s stamina bar, and when it runs out it’s supposed to go on to the next attack but for now Ten has only one attack. :P

Also, because dying is so fun, I’ve added a Game Over screen! 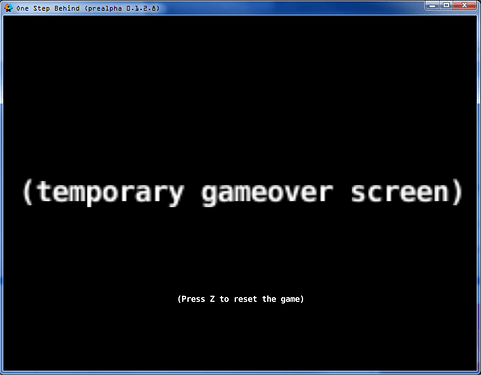 image816×635 45.4 KB
Pressing Z doesn’t really reset the game, it respawns you at the beginning of the game so you can listen to the earsplitting soundtrack “25”. (That track was honestly just a test, but I could totally use it for an unsettling area)

(Seriously, it’s a pain to listen to this. Please be careful.)
(Actually, I just realized you could upload audio. Huh. Maybe some time I could upload the entire OST I have so far for OSB.)

Also reentering the Bullet Hell test area does work, but there are a few glitches with the absence of music and sometimes some controls not working and whatnot. I plan on fixing that, if I could find a way. :P

This time, though, it’s nothing major (or it’s everything major). Just an announcement that I’ve opened an Itch.io page for One Step Behind. You can get the latest build here:
One Step Behind by ZaTimou

Hey, that means all of you can actually try out this “game”! (I would hardly call it that. Not even alpha yet. More a tech demo than anything else, haha)

It’s been a while.

And unfortunately, it’s going to be even longer.

I’m currently transitioning from high school to college, so this project (along with a good portion of my other projects) will be on hiatus for the time being.

In the meantime, at least I’ve added character portraits for dialogue boxes. 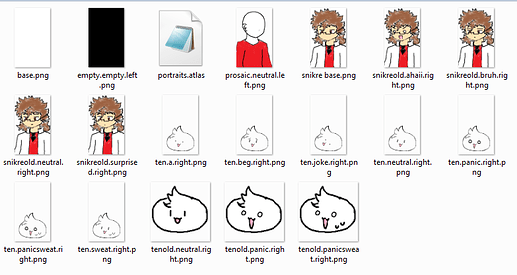 Well, see you all when I’m in college.
This is ZaTimou, signing off.

It has been… a few months.
And if you’ve forgotten about One Step Behind, I don’t blame you. I would’ve forgotten myself of I wasn’t working on the lore.

But as for the game…

I’ve made a terrible mistake with Defold.

Now don’t get me wrong, this isn’t a problem with the game engine, nor does it mean I’m leaving Defold, no.
It’s just a small problem with yours truly trying to dive into something without knowing much beforehand.

As I finished my high school classes, I’ve discovered that I am terribly prepared to make such a large-scale game, and with something so ambitious for someone’s first project with the first game engine they’ve ever used, and apparently doesn’t understand enough about coding to make things optimized. For now, it’s best that I start from the bottom and work my way up, to gain more experience with Defold. This means smaller games, nothing too ground-breaking.

Now, this does not mean One Step Behind is abandoned. It just means it will be put on hold until I have the skillset to be able to tackle a large-scale game like so. I’m not going to give up on a game I’ve planned years for.

Until then, I would work on smaller games to gain Defold experience, or work on other coding / game projects. I already have a new game in mind:

Oh, and I would still like to thank the Defold community for all the support they’ve given me in the past. It’s a very warm community, and that’s good. I’ll definitely be around maybe once in a while.

This is ZaTimou, signing off. :3

First projects are the best teachers. I never finished my first game (and it was supposed to be so simple, much less ambitious than yours…) But I learned so much along the way. Good luck with your next one!

I think you’re experiencing what a lot of us have experienced.

I did something super similar with my first major project (also an RPG). I spent the better part of two years working on something beyond what I was capable of at the time. I’ve taken a step back and worked on a bunch of smaller projects and have greatly expanded my knowledge and skills with Defold. There’s no shame in taking time to build a skill set to help with a larger project.

Best of luck on your new project, can’t wait to see what you create!