I have to manually move the folder after macOS bundling.

Or just use the per-platform subdirectories in bundled_resources instead of using the same banks in the same location everywhere.

Editor scripts are coming eventually which I assume will make this more convenient in the future too.

At the moment, I don’t want duplicate files, and for now platform specific folders do not override common folder files instead make a conflict error.

As a workaround write a python/bash script that will place all the needed files into the place. Then run this script manually before bundling.

I have a collection of utility scripts in /external directory in my project.

This is exactly what I do. I have a script that does all sorts of optimisation and moving things around, then invokes bob and I basically never bundle from the editor.

I do most builds on Windows and do use build scripts there. For Steam releases it is invaluable to use them to build and upload. This is my laziness on macOS for now to not use one.

I will set one up to do Mac App Store builds for bundling, house keeping, signing, packaging, uploading in the future.

Review failed and I’m not sure what to do about it. It works for me. And it seems like I’m following all of the signing steps correctly. I tested on macOS 10.13.6.

Ok, got it to reproduce… after restarting this mac.

So it must be the codesign step?

Woah, now when I try to codesign I get.

I also changed the name of the cert to be full. Maybe this was a problem before.

Now after doing codesign I can’t open the app every time, running the main binary every time does not work. Going to try to rebundle fresh again.

I realized I had game center checked in the id so I added it to the entitlements. Still waiting on bundling… 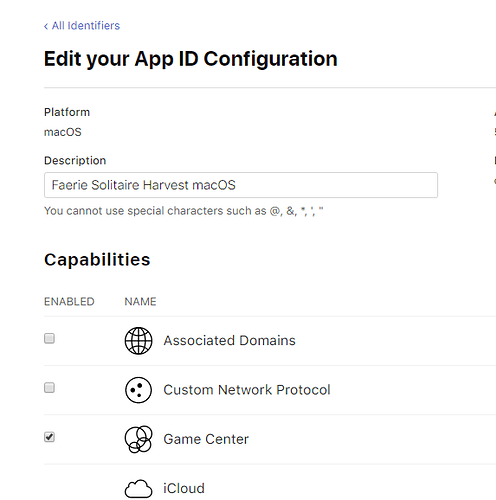 Bundling finished. I made a copy of the app just in case I need to re-attempt things…

Running before signing works. After codesign I get

At the moment, I’m unsure what to do.

I removed the game center entitlement and it’s working again after codesign.

Back to “permission denied” currently I’m assuming it is an entitlement problem but I don’t know why.

Going to test un-checking game center in id and not including it in entitlements.

Nope. Tested on a guest account and still get “The application ‘…’ can’t be opened.”

3 Likes
If you have a Mac and active App Store membership please test codesign with guest account
Pkeod September 6, 2019, 7:26am #191

I’m not going to spend more time on Mac App Store build for now. If anyone can attempt to get a build to sign and upload and be approved I would appreciate the insights. 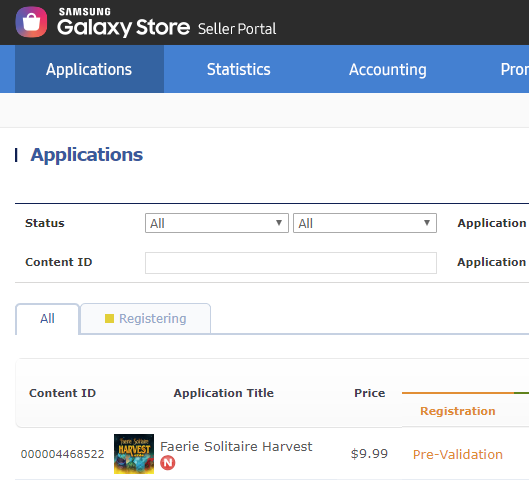 Sales stats from iOS App Store so far. I paid Apple the $99 to renew (a lapsed account) 8 days ago on August 30th, and probably the game will have made that much by tomorrow’s stats update. It feels good to break even on that entry cost in a few days! I’m certain people from here bought some copies on iOS so thank you!

On the analytics page most things don’t show much because not enough data has been collected yet.

Most likely the sales will taper off until Black Friday / Christmas where usually there are big larger sales bumps on iOS from new device sales. The next times FSH is on sale on Steam I will put it on sale on mobile for the same discount amounts and periods.

There were a few people who requested promo codes from us for the iOS version and I sent some out. So far one person has written a review and it seems positive according to Google translate http://app-s.ru/news/faerie_solitaire_harvest_skazochnyj_pasjans/2019-09-07-13967 he contacted me for more questions and seemed to enjoy the game more than he thought he would.

I still plan to do some more quality of life updates specifically for mobile such as increasing the sizes of things and generally making it easier to play on the smaller phones. It will happen in time.

FSH on Samsung seems to have passed technical validation and is now waiting content review? Most of the English on the site is good but some of it is still difficult to understand. 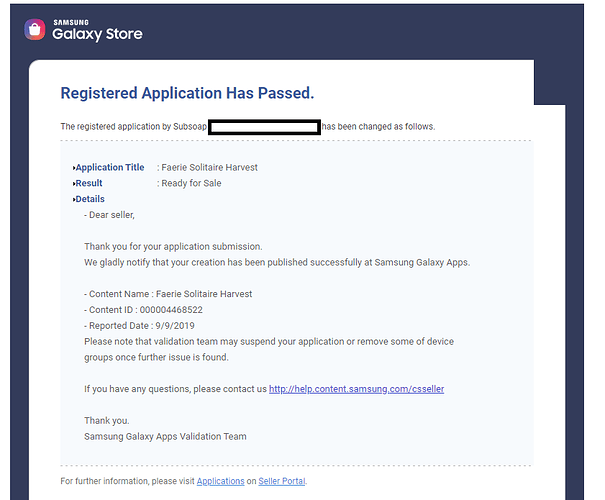 Updating sales data from places I can share. I’ll wait a while to share again since there will probably be no major difference in the totals for a while. Planning to most likely put each version on sale Thanksgiving and Xmas holidays here. 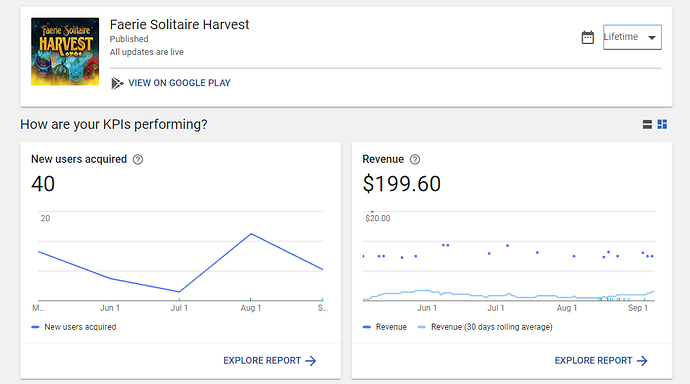 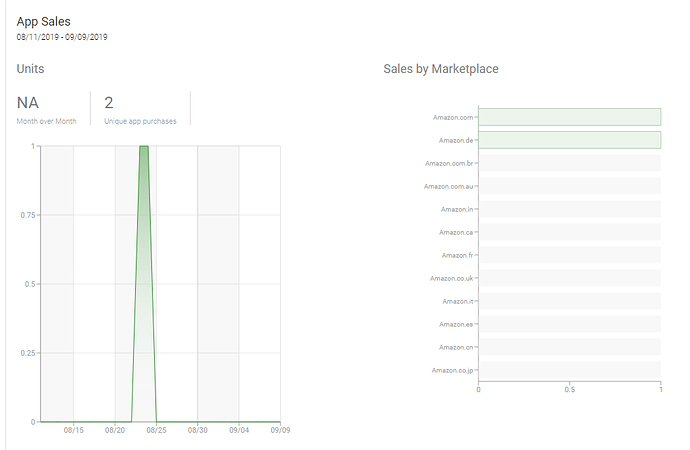 We’ve been chugging along on Dire work. It will be a very cool game and I’ll have more to share about it on its thread soon.

I hope you got through the reviews of FSH, and generally, if people are complaining, it’s about a though level of difficulty and punishments regarding spending more and more money, when trying to win the game using special abilities that are getting more and more expensive. My brother tried the game on PC and, though he likes the game and how it feels, he admits, that he spend all his earned money in some level and couldn’t get any further because of he can’t afford to pay for abilities that could allow him to win a difficult level. I was having the same problem on mobile and many levels needed to be replayed to have a great cards that just “fits”. The problem I see, is that the economy is not established. Maybe you are rewarded a bit, but after using some abilities you can’t afford to buy next, so it’s making you annoyed, because it doesn’t depend on your skill, but rather on your luck

Also, I read a nice text on gamasutra last time, it could be useful (as I have the same thoughts about a trailer ;)) : https://www.gamasutra.com/blogs/ChrisZukowski/20190906/350248/How_Steam_users_see_your_game.php

First - please don’t read the text below! Please record like 5 minutes of your normal gameplay and upload to youtube for me so I can hopefully understand the gameplay issue.

There’s for sure more we can do but besides some polish we won’t be doing another major update for 3 months at least.

Here’s an update on iOS since it’s the only interesting numbers. Refunds happen on iOS too but it’s not as bad by far! I know at least 1 of the people who refunded I already submitted a new iOS build which fixes their issue but they didn’t want to wait for it. 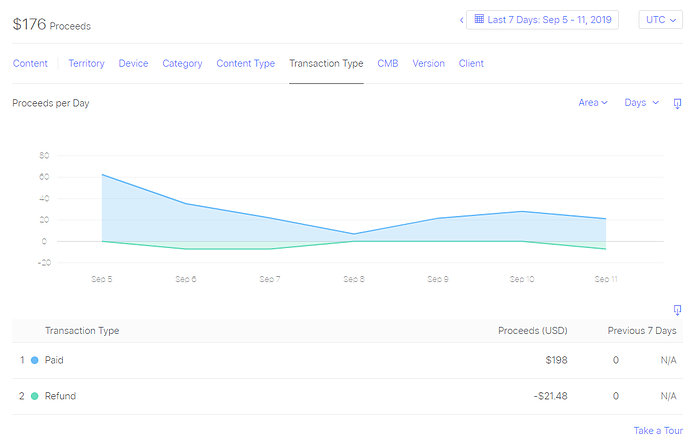 On Steam there have been 62 refunds to date, but that is actually pretty low overall. Most of those refunds people said they were expecting our old game, not a match2.

FSH has been inching toward profitability. At current rate will still take at least 1-2 years to get there (which is fine).

To date FSH Has $700 gross from Google Play and $748 from Apple. It has been on Google a few more months. FSH has had almost no sales on Amazon and Samsung, they are both a total waste of time for premium apps. No features on any of the stores as far as I know. We didn’t have any nag to ask users who did buy to review the game, which was probably a big mistake since there are so few reviews it makes people question the game (on top of all of the other problems in trying to sell mobile games for a flat price), but latest update I added a small nag to the main menu after users play for more than 3 hours.

It released on two casual portals so far. Both of them seem not that great $ wise, but it all adds up over time. There will be one more portal for sure in January. I will still be trying to get the game on more portals, and I still want to try to get some big publishers like EA to distribute the game.

I am planning to do one more larger update for FSH sometime this month, and then that will be it for this game except for maintenance. The next update will remove the cost of spares/redeals/retries since that has been a big complaint from some people who want an even more casual and forgiving experience - along with not requiring full clears of board cards, instead only 7/9 hands in a location will require full clear. It will also add apex talents which will make the final star tier for locations more achievable. 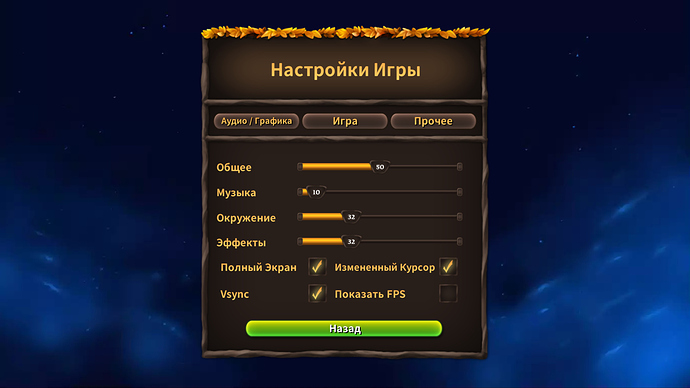 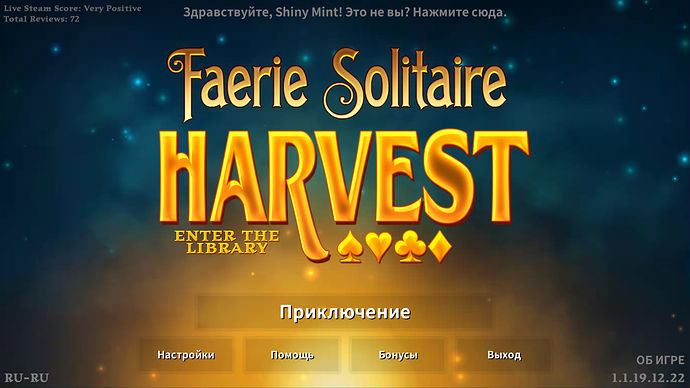 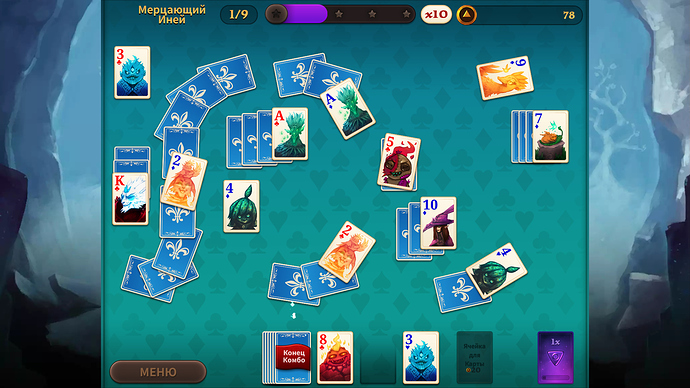 The in game text now supports Russian on Steam! The translation was done by https://www.fiverr.com/brightsiderus he was very professional about the process, asked good questions when he needed to, and delivered on time. I recommend his services! If you need large amounts of English to Russian text done send him a message to see if he’s available and to get a quote on the amount of text you have. There is historically very poor Russian translations done for games and people like him want to turn that around.

Although I don’t speak Russian another dev referred me to him. I hope the translation is good!

I need to update the few baked in text texture that’s still in English and will do that next build.

Early next year we will be adding a few more translations: German, French, Spanish, Italian, Dutch, Brazilian-Portuguese and hopefully Chinese although I have yet to find someone who I trust to do it who is also available. The total game text is around 15,000 words. I want the game to support as many translations as possible but the costs for each adds up and the game is still only about 50% toward breaking even on cost.

Just so you know, in my real life, I often work as an English-Spanish and Spanish-English translator in my real life. For such a big job, I’d charge around 0.054 cents a word. I’m self-employed in Spain and have been so for the last 3 years, working with companies and professionals that communicate in English/Spanish. I’ve worked with many big companies (EY, Kuhne Nagel, Everis, Adidas, etc) as well as a few government contracts. My biggest contract was 40,000 words, which I managed alongside a team of 3 people. If you’d like to talk, please get in touch.

Our next game Dire has way more text… about 75k. It is very story heavy with a lot of NPC dialog, cutscenes, and lore.

For Harvest, the English -> Spanish translation is already in progress. But I can contact you about future projects! Especially Solitaire.io related. If there is ever anything I publish on there you would like to translate just send me a PM! I’ll be publishing more smaller games on there as well as daily articles from now on along with the big game releases.

Faerie Solitaire Harvest is now available to play for free as a webgame!

Play the full version of Faerie Solitaire Harvest in your browser for free!

The reason we are doing this is because I am betting that in the long run it will generate more passive sales than potentially get cannibalized. Passive sales are continuing to be very low so it’s worth a shot.

I’m using BunnyCDN for bandwidth (if you want a referral link to try it yourself PM me) and so far I would recommend it for lowering costs while still having good service. It seems to be the CDN of choice for various other online game hosts too.

FSH is in maintenance still, it’s not selling enough (yet?) to merit more big updates. Because of the portals it will still get a few more languages. And we will probably pay for Chinese too at least, still looking for a good English -> Chinese translator.

Learn about the development of Faerie Solitaire Harvest.

Excellent write up. Learning lots from you.

Same here, we really appreciate it and wish you a success!