Yeah, so both the Facebook extension and the AdMob extension use and include a jar for com.android.support.customtabs. This and the other support libs should probably be moved to a base extension.

and also https://github.com/Dragosha/defoldgamecenter as project folder.

Which list of dependencies need to build latest release FB extension now?
I’ve tried this as mention in updated docs:

I will make a separate post later today about changes to the Android base extension dependencies to bring some clarity. Sorry for the temporary confusion.

Ah, that’s because the 2.3.x version needs the 1.2.164 server.
We’re scheduled to release a new version today, in the mean time, you can use https://build-stage.defold.com

You need both the new version and the new server, we’re working on it…

Will purchase events be posted to FB analytics automatically?
Referring to this https://developers.facebook.com/docs/analytics/send_data/events:

So, if I’ve kept this checkbox, will the purchase be logged automatically by the FB extension?

Ok, I see IAP events in FB Analytics dashboard, so it works (and I did not send these events manually).
But I see 2 events, when there was only one purchase (and it was restored more than 2 times).

Hi. I see the 6.3.0 version of android facebook SDK was released recently:

And, I’m not 100% sure, but it seems supporting AndroidX now (at least I see in commits some related stuff, and switching to 28 version of android SDK as well).

Is it possible to update the extension?

I’ve tried to update android part by my own, updated dependency in build.gradle, fixed references in code from old support libs to new androidx libs, but stuck with susch error message:

Possible solution I’ve googled is setting these lines in gradle.properties:

But I don’t see a way to modify properteis files and don’t know if it already set so.

We’re still using Android 28, and updating is ofc on our roadmap, but it’s in there with other features.
It usually requires a lot of testing, and also upgrading a lot of extensions to make sure they still work.

Let me remind you that we’re not actually using gradle to build Android, we merely use it to resolve packages, to avoid the manual unpacking and conflict resolution. Therefore it’s not as simple as setting a property in your gradle file.

As for always chasing the latest version of every package, let me tell you it’s a very big timesink, and often with pitfalls. That’s also one of the reasons we tend to delay updates a bit.

As for the feature, what’s the use case? What feature in that facebook upgrade do you wish to use?

I’m forced to switch to AndroidX “way” by other extensions - Admob, Firebase, IronSource. All this can work on old versions, if you made extensions at the same time somewhere in the past, when AndroidX was not pushed by Google. But for example for IronSource it’s not an option, I can’t use old version of IS and ad network adapters and SDKs. And this affects all other extensions, which do not support AndroidX. In my case only Facebook SDK is the problem. Everything else is up to date.

BUT, just because the Facebook extension uses old support libs, it brokes all other extensions, which already migrated to AndroidX way. So I either should throw away Facebook SDK (what means no FB ads for UA, as tracking will not work), or throw away Admob and Firebase (what means no Google Ads both for monetization and UA).

Right now I’m using old Firebase extension version for Android build, it works with old FB extension, but I can’t add Admob; and using up-to-date Firebase for iOS, because the old one conflicts with Admob on iOS. This setup is already complicated and I was waiting for official support of AndroidX from Facebook, now it’s live and I want to use all the libs up to date and synced.

I’m still trying to update the FB extension and prepared a branch just to illustrate the issue I’m stuck with.

Here is a dev branch in forked repo from original defold facebook-extension: https://github.com/MaratGilyazov/extension-facebook/tree/update_6.3.0/android

I did just few changes: https://github.com/MaratGilyazov/extension-facebook/commit/997d9e26908cfaef90cfc6baffa08b21683fcd68 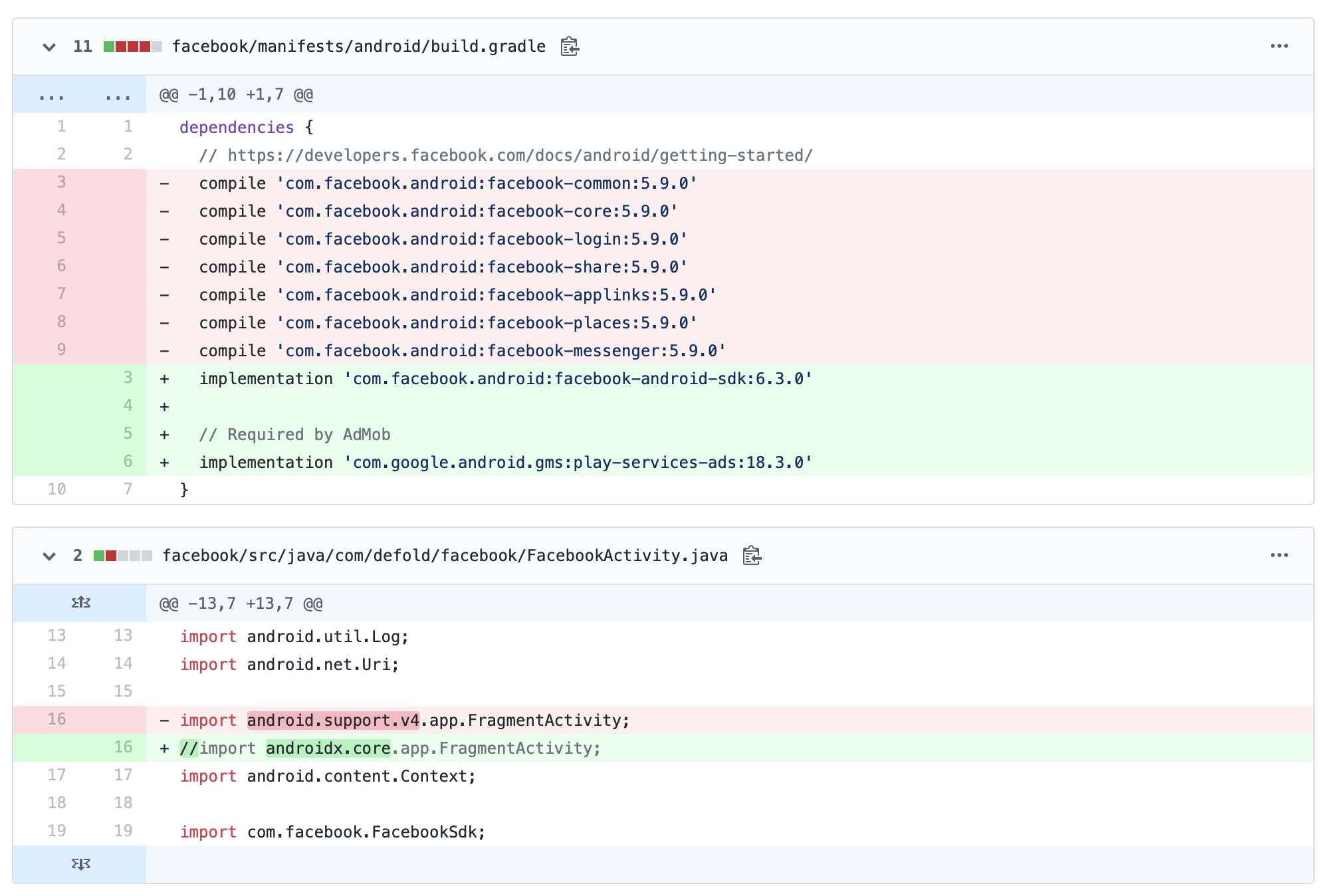 Thats the main issue I can’t solve by my own

But when I try to build from such state, it fails with such error:

Any ideas what I’m doing wrong and how to fix the issue?

BTW, if I use only dependency to Admob itself, without facebook, it builds normally (in my ironsource extension, for ex), so build fails only in combination of FB extension and other up-to-date plugins like Admob or Firebase

Important to keep in mind is that we use Gradle only to resolve project dependencies. The android.useAndroidX=true setting will be ignored.

The problem as I see it is that Facebook 6.3.0 still uses android.support.v4.app:

So actually they did not switch to AndroidX yet

I saw that this PR named “Update to AndroidX” was not merged, but also there was something said about “this will be supported internally” and at first I thought this commit covered what needed:

changed 3 files with 8 additions and 8 deletions.

But obviously it just switches version of used support libs, and it’s not about mirgation to AndroidX.

Ok, I’ll be waiting for further updates in FB repo.
Thanks for checking and sorry for disturbing on Saturday

And this Jetifier tool seems to be used for such migration “manually” somehow, but I don’t think it’s a right way to even give it a try: https://developer.android.com/studio/command-line/jetifier

This release updates the Android and iOS SDKs to version 6.5.1. This is the last release for the 6.x branch of SDKs and the last SDK for Android which doesn't use the new AndroidX support libraries.

This is the last release on the 6.x branch of SDKs and the last SDK release which uses the old version of Android Support libraries. AndroidX is included in versions starting from 7.0.0 of the Facebook SDK for Android.

NOTE: We will not yet make this update to AndroidX as we also need to modify the build system to use the jetifier tool to automatically upgrade extensions to use AndroidX.