The latest beta is now released, and we invite those interested in beta testing the new features in the editor and engine to join now.

The beta period will be 2 weeks and the next planned stable release is two weeks from now.

NEW: (#5989) Improved on the error message when reaching the max number of possible draw calls

FIX: (#7244) Conform ‘buffer is full’ error messages
When a component cannot be created we show an error message on where in the project that can be modified, but previously the messages had different wording. This change tries to conform most of these cases into the same format.

Assuming a game.project with the following:

CHANGE: (#7250) Use uniform scale for the particle fx in gui
The editor preview of particle effects in gui scenes did not show an accurate representation of the particle effect at runtime. After some investigation it turns out that it was in fact the runtime which was inaccurate and picked the x component of the scale at all times instead of the minimum scale value from a non-uniform scale. This means that a particle effect with scale [5.0 1.0 1.0] used scale 5.0 while a pfx with scale [1.0 5.0 1.0] used scale 1.0. The correct scale should be 1.0 in both cases since the smallest scale value should always be chosen.

This is likely a regression from a change introduced in #2540 back in 2018. This is now fixed and particle effects both on game objects and in gui scenes will use the uniform minimum scale value in both the editor and engine.

FIX: (#7200) Make the search for resource links more efficient
On big projects with a lot of resources, it might take a lot of time to show output in the console because for every potential resource link we have to filter through all tracked resources. We now try to be smarter about it, both by limiting the candidates for search only to ellipsis-prefixed ones and by building a suffix map for the added lines batch so we have to go through all the resources less frequently.

FIX: (#7112) Non-editable resource variants
Added a Non-editable Directories field to Shared Editor Settings. After a restart, resources below these directories will be loaded in a non-editable mode that will be more efficient to load and manage, at the cost of not being editable. In addition, these resources will not be overwritten when saving in the editor.

Brilliant release!
I’m curious what is the use case scenario for this?

Nice! Was expecting this one for quite a while.

Brilliant release!
I’m curious what is the use case scenario for this?

It’s for cases where a lot of content generated outside of the editor without needs to be able to edit it in the editor.

We see more and more tools that can export content into Defold format, for example Tiled, Blender scripts or TrenchBroom.

If after export you have ready-for-use content you don’t want to edit in the editor it will be efficient to mark such content as read-only. That will make the editor much more responsive especially in cases when you have a ton of content.

If you have more questions feel free to ask and tag @mats.gisselson , he knows more about it and can explain it better.

Nice! Was expecting this one for quite a while.

We will add documentation about this soon!

How to worked with mesh culling?
On my project in doesn’t worked:(

I got the same error for the clipboard extension on 1.4.2 BETA and Windows 10.

How to worked with mesh culling?

Sorry, the description wasn’t very informative. You need to manually set a bounding volume on the buffer I think. I’ll write up documentation and an example tomorrow.

Thanks, wait for example to make tests in game:)
Ohh. So if i have a 3d level with a lot of meshes, it don’t worked out of the box? 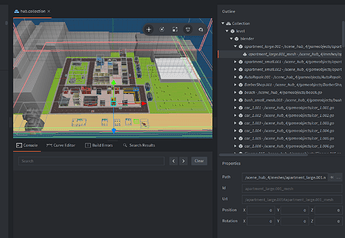 Correct. Given the dynamic nature of the buffers, we opted for letting the users set the bounding box manually since they already have that data.

This is strange. I don’t think we have vhanged that api. Perhaps we’ve accidentally changed some includes. We’ll have a look in the morning!

Just quickly looking at the includes, you could try moving the windows includes to the top, or before the ”dmsdk/sdk.h” in particular

I’ve now submitted a fix to the dmsdk/sdk.h where I removed thread.h (which I had added). A new beta build will show up within the hour.

Some more clarifications on where the AABB+meshes feature is currently at:

With the latest addition of the frustum culling of meshes, it allows us to set meta data to a buffer at runtime. This is done with either Lua: buffer.set_metadata(), or C++ dmBuffer::SetMetaData(). There are also getters.

Since the meshes are mainly for dynamic use at runtime, we first focused on the runtime part of the meta data + culling. We recommend when updating the buffer with new vertices, to also update the bounding box accordingly.

Since the buffer format is very generic (could be a sound or anything you want it to be), we cannot reliably calculate a bounding box for you. Especially if you consider that the vertex data may be packed in any way. E.g. in a terrain patch, the data may very well be represented as

where the x/z are in a different space from y.

Further improvements can be made, such as storing meta data in the buffer resource. However, it might also be pointed out that the model component will have similar functionality if not more, with multi materials. We’ll also add frustum culling soon for models. And we’re also looking to implement instancing for models.

But, for now, if you are using static pre-created mesh buffers, you need to iterate over your vertices and calculate the AABB manually.

If you get the buffer from a resource you can’t use the m_Buffer pointer as-is, you need to get it from the m_BufferRes. @JCash maybe we need to expose the UnpackLuaBuffer function to the dmsdk?