If anyone is listening (or not), I’ve decided to make a couch co-op game to practice making a comprehensive game for Windows. Utilising simple controls (Directional keys, an action button and pause), particle effects, (OpenGL) materials, sound and a fun level selection system, I wish to create a fun game for two people on one keybord or two controllers, learning how to use Defold and, more importantly, make a game along the way.

The general idea is to make a lot of mini-games for two players accessible from a “central hub” level select menu. The mini-games would be simple and recognisable, such as Pong, a Wolfenstein 3D-esque level, tower defense, football etc.

I tackled the same idea three years ago, but I lost my drive after clashing with the physics trying to bounce the ball off the paddles in Pong.

I’ll see how much I’ll be able to do, studying at uni at the same time.
Feel free to follow me along the way, learn with me or drop suggestions.

I’ve been working on this for about three days before making a topic on this forum, so I’m logging my progress here.

T+3days:
I created this project.
I ran through the files, checking out what they had to offer and reacquainted myself with Defold and the different files available.
I set up inputs in input/game.input_binding for WASD, Arrow keys and Controller and edited the game.project file a bit.
I drew simple shapes and set up game object files for Pong.

T+2days:
I started work on the scripts. Programmed the paddles first making them actually move. Referencing APIs, Manuals and Examples from Defold Learn I slowly built my code, excessively studying it if it failed. Then the ball.

After reflecting the ball off the walls (see details^) I added the ability for the ball to bounce off the paddles. Since I switched to a civilised vector math, it was easy. I dove into the on_message(self, message_id, message, sender) function and message_id = "contact_point_response".
I wanted to make the bounce directional based on where on the paddle the ball lands, instead of the boring constant angle, giving the game some strategy. So, I calculate the excentricity of the hit:

T+1day_yesterday:
I deleted the bit of code within ball.script that restricted the game object between y=50 and y=700 and replaced it with another game object that had a sprite and collision object. After I remembered to set it to “static” and after a long and painful process of trouble-shooting leading to me also remembering what masks on a collision object are for, I was set to start. And boy was it painful.
For some reason my reflect(self) code seemingly broke. I figured since the physics object sends out multiple events, I should make sure it reflects once, thus saving the last border under self.lstBrdr=message.other_id, since the ball can’t hit the same border twice. Nothing resolved the issue and all the code seemed fine.

Long story short, turns out the if not command works under very specific conditions in Lua that I hadn’t realised.

Yup… Two parenthesis made all the difference.

I also set up a simple score-keeping gui, that changes based on how many times the paddles have hit the ball and also changes colour based on which was last.
…once I figured out the msg.post(id, message_id, message) function, of course, or rather the addressing bit and how to write an id in the first place.

T-0_current:
This is the state of it right now: 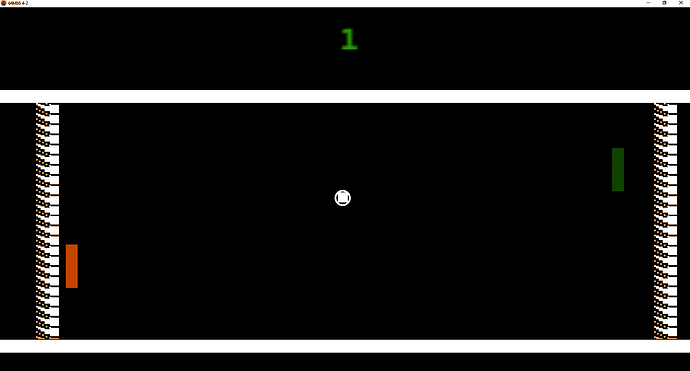 T+1day_yesterday
What I’d made thus far worked great. I found some bugs, which I’ll get into later, but it worked well.
Until it didn’t… When I added stuff.

score.gui_script
I added four more text nodes to score.gui and set up code that would serve me later. I added nodes that would display how often the player had won total, reading from a save_file and saving it back onto it each time that player won/when the level got unloaded - haven’t decided yet. The other two nodes would display the current victories in the on-going game. Added code to the goal.go object that would send an update to the gui script and later to reset.go#reset.script as well.

And that’s where it all broke

The gui#scoreTxt node didn’t update anymore at all. I tried trouble-shooting by shoving pprint()-s everywhere. All the necessary functions got called, which they should, because I hadn’t changed them and they worked before.
For whatever reason msg.post(hash("/gui"), hash("score_update"), update = {colour, score}), which worked flawlessly the day before, resulted in an empty message sent to the gui object. EMPTY! No clue why!
To add insult to injury, when I moved onto programming the current score nodes, the update intended for paddle bounces updated the winning text of player 2 specifically??

reset.go
I added a reset game object with nothing but a reset.script inside. First I wanted to just reload the collection, but since I’m utilising current_win text nodes in the gui and reloading the entire collection would lose all data without a .temp file (and I didn’t want to bother with that too, just for this) I decided I’d reset each game objects position and re-initialise them.
I quickly learned Lua’s for loops and tables aren’t exactly friends so I had to work around that, and then I learned that Lua doesn’t have any try-catch structures either, and pcall() and xcall() don’t do a n y t h i n g in my case, so I had to work around that too.
In the end, the script doesn’t work. It doesn’t even reset positions of objects, one way or another, let alone re-initialise them.

I checked about a million times for typos and other errors, and I have exactly 0 clue why the update goes through to "current_win" . The Goal.script update, by the way, also updates the current win node, as intended. I don’t know… I moved on to change environment and not get beat up by this.

the fact that nothing works - yeah…

I suggest that you share your project as a zip file (exclude the .internal, .git and build folders). Me or someone else can take a look and help you move forward with your project.

This should be it. I’m very puzzled why this doesn’t work as it should anymore.

I should say, my code might be messy and overcomplicated, but it’s well commented.
And since this is a learning process, some things may be built in strange ways and I wouldn’t even know.

But if anyone is willing to check this out, I’d be very grateful.

But if anyone is willing to check this out, I’d be very grateful

Ok, so one thing that stands out to me is the fact that you are using global functions in your scripts. Variables (and function definitions) in Lua are global by default. To make a function or variable local you put the local keyword before the declaration:

The use of global functions becomes a problem in your project since you have multiple definitions of the score() function (once in Goal.script and once in ball.script). The result is that one of the function will be replaced by the other when it is declared. And when you call score() from Goal.script and ball.script unexpected things may happen since you are not calling the function you expect to be calling.

My recommendation: Go back and change all of the non-lifecycle function (init, update, on_message etc) to local functions and make sure you declare things in the right order.

If two functions need to call each other you can solve it like this:

I was completely unaware global functions extended across the entire Lua runtime.

I made most of them local (a few might come in handy globally) and made sure they would be defined in time to be called.

One I just placed at the top after function init(self) the rest I called in advance with:

Everything I’d made until now works just the way I need it to.
Thank you so much! You saved me a few headaches.
: )