I’m working on a straight forward space shooter a la Tyrian.
"A shmup without the stress of so many bullets"™.
For Android initially. Sprites are from Dan Cook, Tyrian game.

What more is needed to be done:

What I’d like to do as well if there’s time:

Wish the day had 48 hours instead! I have this idea for iterative development. Make the game read the enemy waves/events for a level from a json file served from a web server. That way I could have a gui on my server for designing this json data and design new levels and try out while commuting to/from work.

Figure out a smart way to handle different screen sizes.

so programmer art will be mixed into it

Don’t let that stop you. If you have a real game at the end you can consider investing in paying for some better assets. Most important thing is doing the follow through to finishing the game.

Render target based shaders are not so hard but also something you can do last.

Check out the games at http://mking.com/ would be good inspiration for your style of game.

I actually am using rendercam. And it helped me set up the 4x scaling quite simply. I also managed to make a copy of that renderscript to adjust predicates; adding a “tiletop” layer that goes above the particle predicate so I can control the experienced z-value of particles.

What I don’t have figured out (and the consequences thereof) is allow the game to go fullscreen in both 16:9 and 16:10 for example. And deciding which part that should always be visible, and which to cut in what resolution etc. Needs some thought work on my part (which is tricky in the late hours with baby screaming

Done a bit of work on the background parallax thingie.
Basically it is just three layers: background stars, nebula clouds and foreground stars. They move in different speed in that order. Background slowest, foreground fastest. Nebula in between.

The nebula clouds however are actually two layers which shift/swap their opacity presence over time. You can see in this video how it shifts eventually from the blue-ish nebula to more of a green/yellowish kind.

(youtube sadly mushes up the quality pretty bad, for slightly better quality I have an mp4 of the same clip: http://waikiki.macklin.se/livefolder/defolddevlog3.mp4)
It’s a really simple technique that gives a really nice effect!

Also I’ve added a cooler death explosion for the player, with a camera zoom in and time slowdown.
Rendercam made it easy to set the scale for a zoom in, but it’ll be trickier to do a gradual zoom in over time. But probably doable.

Also, at the start you might catch the built in coin magnet!

Wow, the explosion for the player is really neat!

Thanks for sharing the dev diary. I have been working on something similar on and off for a while and don’t get much progress due to various distractions. Seeing your project really motivates me a lot!

Rendercam made it easy to set the scale for a zoom in, but it’ll be trickier to do a gradual zoom in over time. But probably doable.

Remember that you can go.animate() script properties defined using go.property(). You should be able to do something like this:

From my testing it seems that rendercam.zoom(x) continuously zooms on each update pass into infinity, the value passed in.

Not like “zoom up until x and stay there even if called again with that same value”. So a zoom(1) for example, in update, would zoom out forever. It then becomes trickier to interpolate and do math stuff to get a nice easing.
Or I could do an animation with go.PLAYBACK_ONCE_PINGPONG from 0 to -1 to 0 to zoom in a bit, but then it’d be a lot of trial and error to figure out the exact second length for that animation to end up at my desired zoom level.

I wish the zoom worked more like a “zoom to this value” than a continuous zoom.
Or a new function, zoomTo

Edit: aaaaand that’s what I have set_ortho_scale for, which I was already using in my player explosion. Once again, I have scientifically proven that working late lowers perceptiveness

. . . Scientifically proving that testing on tired users can result in valuable feedback?

I suppose “set_ortho_scale” is probably not what people will think to look for (unless they have experience writing camera code). I will see about making this stuff a bit more intuitive. It would be pretty convenient if you could just animate zoom directly.

Still hackin’ away at this game whenever I find the hours…

Probably more stuff I don’t remember changing. Still, lots to do, trying to get my focus on what really matters - the actual gameplay and feel.
Need variety in enemies and hazards to make it interesting and challenging.

Looks great! I like how you can deflect the homing missile with your bullets!

Currently struggling with GUI, coming up with a design for it.

Working on the GUI, here’s a rough design that might be final in the end. 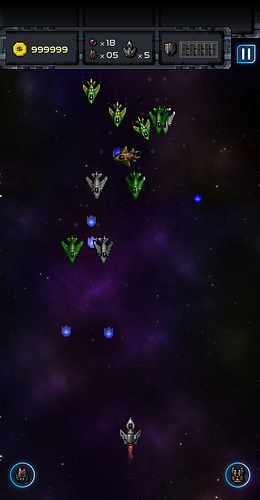 And probably 20 things more along the way I haven’t though about.

Sunday was fairly productive as I got 9 new enemy types done, each with different behaviour.
One of them you’ll see in this new video clip! But that’s not all…

Thanks to all the help from @dapetcu21 I’ve managed to get FMOD up and running, and damn… I think I’m in love! Maybe a little bit with dapetcu but mainly FMOD. It’s amazing how easy you can do advanced reactionary audio.

What you see in the clip is just a placeholder M-16 autofire sound with a release tail, but my time scale slowdown in game connects directly to FMOD and syncs the pitch with the time scale. So cool!

dapetcu, I feel bad for asking even more, but if you get the Android version running I for one will be a happy camper

Lately it’s been hard finding time for working on the game, if I’m lucky I get 1 hour of seemingly drunken (out of tiredness) coding per evening/night, but having to prioritize family and work makes it tricky.

But still work is being done, and there’s no stopping in sight!

“enemydrifter” is a simple empty game object which has the following script:

This is how it looks in game:

This solution is nice and simple, it does however not let me rotate the enemies. Because x/y is at 0/0, so rotating would instead move the ship as it’s far “outside in the circle”. But several enemies handle their own rotation within themselves so it’s not a big need.

I’ve been toying with the idea of implementing a primary weapon that doesn’t fire but provides a bullet shield for a short period of time. I’d like to slow down and deflect enemy bullets but I think it’ll be hard to do something cooler than just flipping their velocity to go the other way. But that might be interesting gameplay-wise - having to switch between shooting and shielding at hectic times.

However the main work being done is actually on my web based level editor! Nothing to show yet, but once it’s up and running I’ll put up a video of the workflow in action, might be fun to see.

Alright so here’s a simple workflow example for how my level editor will help me test out level concepts during my daily commute!

Been hard to find time to work on this lately but I’m finally at a stage where it’s something usable. Still needs improvements, have to implement waypoint support for example. But it’s all minor details so it’s close to usable.

Web based editor > level/wave def data into MongoDB > available via JSON > loaded by game. Quite simple but effective stuff. Let me know if you have any questions about the video!

Taking a break from all the “janitorial” stuff of the game I had to try my hands on making a boss. Here’s a preview of the boss “Emerald” fight!

Want to spend your hard earned space bucks on something?
(work in progress) 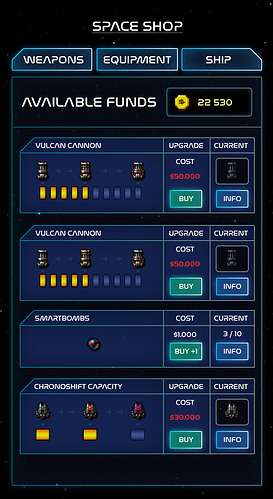 Hi,
Was the game published… do you have a link ? Quite fancied playing it

Sad to say, this project is in hiatus.
Dad life + buying and renovating house etc has taken its toll, and the project happened to grow in scope beyond what I was prepared for. And while I probably should find a partner (someone skilled in graphics design) to work on the game together with, I’ve sadly not had the time to prioritize that.

Perhaps I’ll manage to reboot it some day.

Ok… No problem… Iam working on a shootem up my self to learn Defold.
Looks like you had some really cool ideas in there.

Its a bit addictive working with this engine !