It’s Josh, from Do Not Open This Suitcase. do not open (youtube)

Here’s some information on the game I’ve been developing. It’s another weird one!

The game is called Malas Decisiones, which is Spanish for Bad Decisions, and it involves predicting how your friends would respond to certain ethical dilemmas. It’s a kind of traditional drinking/party game that I used to play with my friends. I became somewhat obsessed with it and ended up writing 320 yes/no questions, and then embarrassingly, I memorised them without even wanting to, and people started asking me for questions all the time. The game is fantastic!

My original idea was to publish a book and use Defold to make some animations and work to promote it. But after corona hit, I decided to make an app and host games via Skype.

I did a test run with some friends last night (you can see the scoring system behind me, top left) 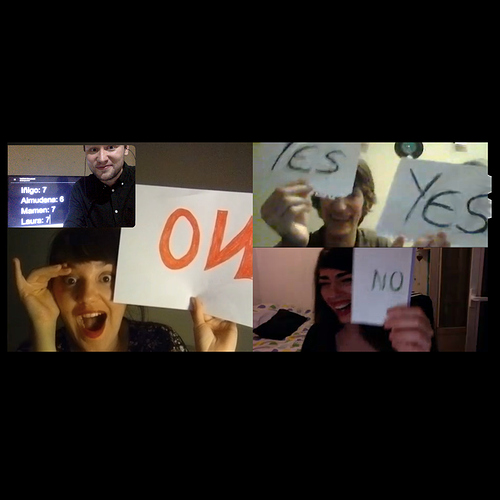 (the yes/no cards are used to answer the questions, or to give your predictions on your friend’s answer. Everyone reveals their answer/prediction at the same time).

Great concept and thanks for sharing!

I have big news (big for me anyway). I can finally announce that JÄGERMEISTER have sponsored this game, and you can now play online (via skype or zoom, with me). I’ve worked with jäger on a few different creative projects in the past with my old band, but it’s the first time I’ve worked with them on my own, and with a project I designed myself.

The game is available on the platform #savethenight, where artists and creators who have lost work during the corona lockdown can make their work available (It’s free for the users, and jäger pay the creators).

As I mentioned before, it’s a party game where players win points for correctly predicting how their friends will react when faced with certain absurd moral dilemmas. It is fun, fast, and you can drink whilst you’re playing it.

I’d REALLY love to organise a game for the defold community. If anyone feels like playing, I’m available on friday and saturday night, and sunday midday, and probably similar times next weekend!

You actually have to book a session

if enough people are interested, the easiest thing would be to organise it on here. But i know that might be complicated!

I’ll be working late on Friday and then probably busy being uncle the rest of the weekend, but I’d love to see the session if someone could record it.

after thinking for a while I’ve decided not to go open source but the game is currently playable if you take the oath: 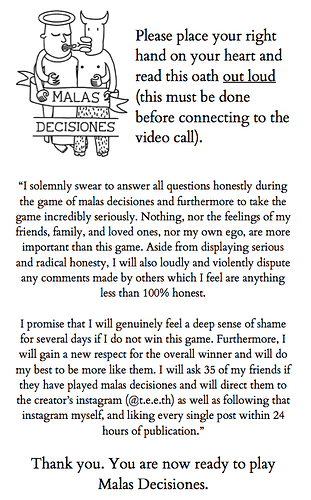 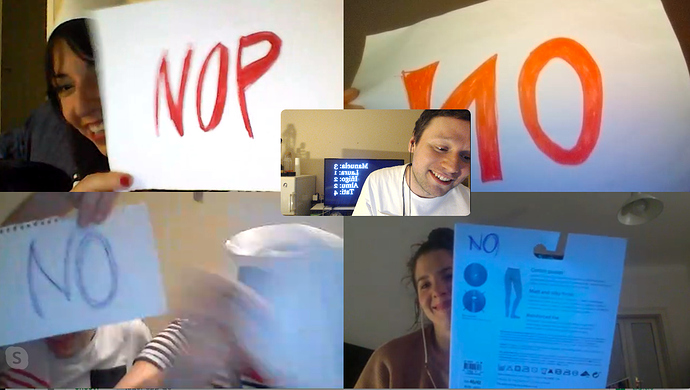 birthday game with some friends of mine down in the south!

So just in case anyone is wondering about the technical aspects (and because this a devlog) i’ll explain:

I render a HTML5 version of the game to the browser and then use my chromecast to put the scores on the screen behind me. The game itself starts with a short animation (the kissing devil/angel which is at the start of the “como jugar” video i posted earlier) and then i can input player’s names, and then it’s simply a question of adding points to each player by clicking on their name.

Why was defold great for this project? well, it was FAST. And I’d already used defold to make some of the animations for the videos. Also HTML build means I can easily use chromecast to get the action on to the screen.

to be honest it’s not a technical masterpiece (it has about 50 lines of code) but i am still proud of how defold is able to quickly and efficiently create something special that takes the actual game itself (which is basically a drinking game) to the next level, keeping track of the scores without imposing itself on the action.

It actually fits in pretty well with my other game, do not open this suitcase. It also fits in with a talk i did about so-called “social” apps and how they divide people and manipulate the way we communicate, whilst pretending to accurately portray reality and hijacking the word “social” for their own ends.

Both games are social experiences, placing an emphasis on human relations, using deliberately simple or old-fashioned technology in order to make sure that there’s no reason to stare at the screen (actually both games have an almost completely text-only interface, i only just realised that!)