After nearly 2 years of a creative block (holy cow), I finally had some inspiration for a new game!

My last game, Apple Spider, was pretty small in scope, and was a really great for learning Defold and increasing the level of detail and polish I could provide in a game. I want to go even bigger now!

A physics-based rocket game, where you must navigate narrow pathways to reach a goal without destroying your rocket! I’d like to add in some extra items you can collect by going through tricky pathways.

The inspiration was a true “shower thought” moment. What if you were in a fart-powered rocket, trying to escape a body? So much potential!

I really want to get the controls and physics figured out before I build out any real levels or features, so I have been experimenting with a simple rocket.

Big thanks to @britzl for his excellent public examples on how to apply forces in the proper directions, and how to rotate an object using opposing forces

Here is a very early prototype video as I work on the controls and physics parameters. The rocket came from OpenGameArt, and is just a placeholder. I also found a cave picture on Unsplash that really fit my theme

This is so much fun to play around with so far.

This reminds me of one of my favourite Amiga games, Turboraketti. And Roketz. May be worth checking out for inspiration! Loved these gravity racers, especially two player split screen. 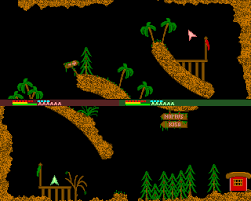 Yes yes yes! I had forgotten about Turboraketti, but man did I play that a lot with my friends! And Roketz was really fun as well. And Gravity Force!

I was thinking a lot about how to design the levels, and I finally decided to try a tilemap.

I wanted something a bit more free-form, where I could just quickly sketch out tunnels and areas, but I need to get something done. With enough variety of angles in the tile set, I should still be able to make interesting curves.

I’m pretty satisfied with a lumpy brown background texture that I made by layering various built-in patterns in GIMP. I plan to use a shader to make it glossy.

The red part is a start at designing the foreground tiles, but it’s not great. I’m hoping once I see a level created, I can get more artistic inspiration. 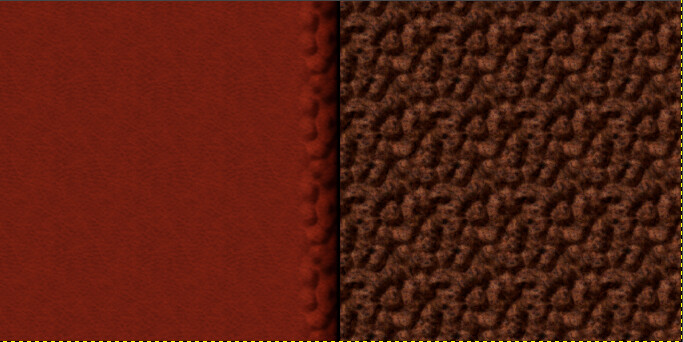