Thank you! Local score, but I think we’ll add online leaderboards of some kind in the future!

Update on $ and other stats for the new FA. 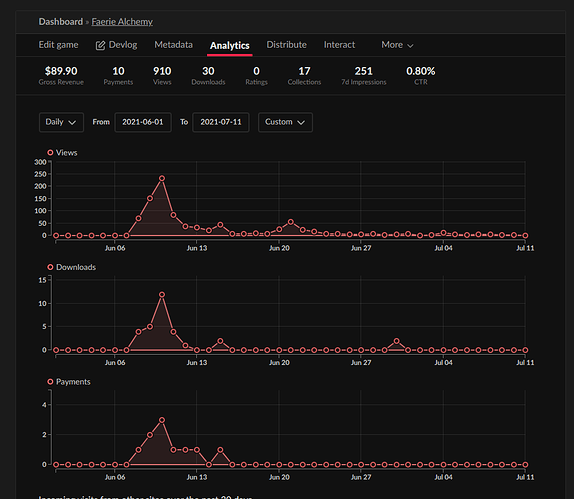 As can be seen, itch version only got some sales early on (and I’m grateful to all who bought it, I’m pretty sure most people who bought this game are people I know

). Android has had two sales (there’s not really enough data but my gut tells me that the previous monetization method of FSH/FSR on Android would make more money in the long term than the Ad/Supporter model even if the FSH/FSR method also seems to be a 1 star bait). iOS got minor features on some country stores and got up to like #113 on paid board category of games (showing how not hard it is to rank there, though it never ranked high enough to get real visibility).

Android version is the only version with ads on mobile, iOS version is a premium game bought outright. If there were many more installs maybe ads would be worth it but without getting any mercy of features from Google it won’t happen. 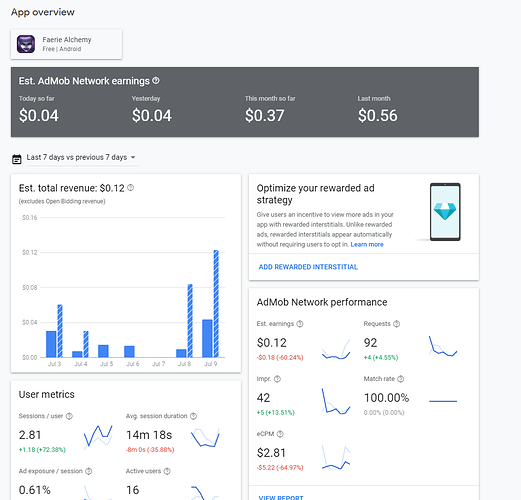 I also submitted it to Poki and offered to make any changes they wanted but was told the game was too niche. Which I unfortunately already knew. But I still love this game and will keep supporting it for years even if it’s never going to make a ton of money.

The web version of FA has made about $0.50 from ads so far. But bandwidth cost on the CDN cost a little bit more (about 100GB used). I suspect because I linked it on reddit and they have a much higher % of users with ad blockers than other possible users. The game is about 70MB and I’m not really interested in trying to reduce that as I don’t feel it would be worth it. But I am being size conscious with future more mass market games and looking at using live update and other methods to reduce total MB in games. I’m hoping Rive is a good option for that in the future.

I also submitted it to Poki

Have you considered Yandex or Game Distribution? Of the three web platforms we submitted Sector 781 to (not counting the original itch.io release Ben did himself) GD is by far the one which has performed the best (although none of them has performed well enough in our opinion).

Have you considered Yandex or Game Distribution? Of the three web platforms we submitted Sector 781 to (not counting the original itch.io release Ben did himself) GD is by far the one which has performed the best (although none of them has performed well enough in our opinion).

I think what I will need to do for those (and what I was considering doing for Poki version if they wanted it) would be to make a stripped down version that is as small as possible, at least below 5MB total. I will consider Yandex and GD in the future when we want to do the next big update for FA and have time to make a mini version for mobile portals.

But I also think that building my own portal with exclusives would be a good idea too even if it’s harder long term!

I’m making payments optional for the itch version. The total sales are just not high enough to keep a price to download and I’d rather people play than maybe get 1 sale every few months.

If you paid for the itch version while you didn’t have to and I didn’t already add your name to the about please PM me so I can add your name!

I won’t be changing the iOS version’s price, but the Android version will be changed later on too.