The biggest change this release is the improved support for the different timesteps between the game update loop and the physics update loop.

The goal is to have the game using vsync, and use the delta time between the display refreshes as the dt for the game loop.
This will fix the issues we’ve seen with game running on displays with variable frame rates (or rates > 60hz).

The display.update_frequency (default is 0) variable has changed somewhat, and is only limiting the frame rate if it’s lower than the current refresh rate of the display.
E.g. it can be useful to limit the frequency to something low (like 30) to simulate the behavior of for instance a KaiOS device.

The fixed physics update is off by default, in order to stay compatible with the old behavior.

(More on the settings at the end of this post)

We’ve added a fixed_update(self, dt) life cycle function to the game object scripts.
When using fixed timesteps for the physics, this is where you’ll want to add the forces to your game objects, in order to keep in sync with the physics updates.

After the requests and comments from the community, we’re confident that the new implementation is a good way forward.
However, due to the nature of the implementation, it wasn’t possible to keep it 100% backwards compatible.
We hope that the community can help test their project with this beta, and find and report any changes in behavior, so that we may discuss a way forward.

We’ve added support for frustum culling. In this initial version of the feature, it’s only used for sprites.
Expected benefits are reduced vertex buffer sizes (saving GPU bandwidth), and reduced number of draw calls (depending on projects).

EDIT 2022-03-23: Frustum culling is enabled by default in the default.render_script. If you have a custom render script, you need to create a frustum matrix, and pass it into your render.draw()calls.

We’ve added support for floating point render targets on the devices that support them.
The following constants are set if supported on the device and are otherwise nil if not supported:

These are the relevant settings:

An amazing set of updates

Just curious, why is 1 the suggested value if 0 is the default?

Backwards compatibility.
Currently, the games use their “update()” function to add forces to their physics objects.
When using fixed updates for physics, you need to move such code to the “fixed_update()” function.

I did a quick test (opened the project and made a screenshot of profiler in two places on the map (middle of the map in top row and far right in bottom row) in Witchcrafter, where several sprites of different atlases are + GUI is not drawn, I have a custom render script + no changes were made to project when switching editors) with 1.2.192 alpha, 1.3.0 alpha and 1.3.1 beta:

Could you please judge the results?

Well, you didn’t seem to have much performance issues to begin with? The Engine.Simtaking ~ 2-3ms is virtually nothing.
Sure there are a few draw calls, but not that many to be honest.

Let me ask you this, are you experiencing any performance issues?

I’m glad with current performance, I rather do not experience stuttering or lower fps at all, maybe sometimes testing on mobile. The fps sometimes drop when I trigger too much particles and there is already a lot of sprites in the screen (I also have still a design mistake, where particles remain enabled not in visible area e.g. fire is burning on other part of map and I try to do mayhem in the other

Since I couldn’t figure out proper Culling myself I started to design smaller maps and add loading screens between - I want to get rid of them and make bigger, open maps, so one part of this is to still load chunks of map asynchronously, but with possibly no stuttering while loading neighbouring chunk, other is to cull anything not visible.

I have several prototypes whose collision shapes consist of a multitude of convex polygons. In addition, they are nested multiple times. Scaling did not work well in version 1.3.0 even though Allow Dynamic Transforms is turned on in the project settings. In the 1.3.1 beta, however, everything is perfect. Thanks!

Could you please judge the results?

Just to make sure: Did you apply changes in your custom render_script for culling?

Did you apply changes in your custom render_script for culling?

No - I did not change anything, even though I was pretty sure there must be something more to do

I’m looking for the information on what should be changed

Compare with the default.render_script.
I’ve updated the release notes with the relevant info.

Issue-6431 - Fixed: Add all android:configChanges with requered API less or equal than 16

There are also changes in the default AndroidManifest.xml file. I would recommend to apply the same changes in custom manifest devs use on their projects.

I try frustum culling, but it doesn’t happen what I would expect.
All I do is set up frustum based on:

So based on that, I would expect the sprites to render in an area smaller than the screen. But in the same way, they are rendered in full screen. Am I missing something or misinterpreting it?

Here’s en example of what I used in my tests: 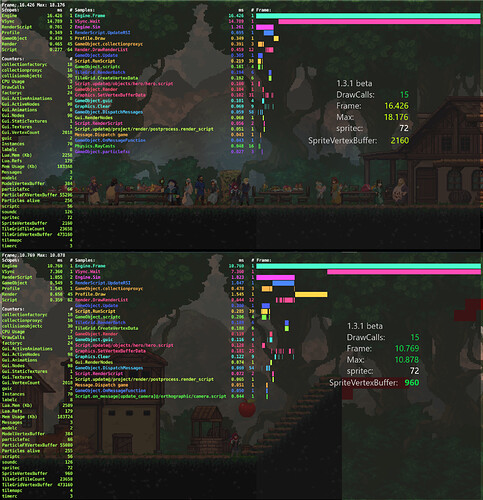 Now the atlases could be optimized and I could have a huge map, with just a few draw calls and really decreased buffer!

Thanks Mathias! It works with vmath.matrix4_ortoghraphic (weird because I thought I should use vmath.matrix_frustum), but still not as I would expect. 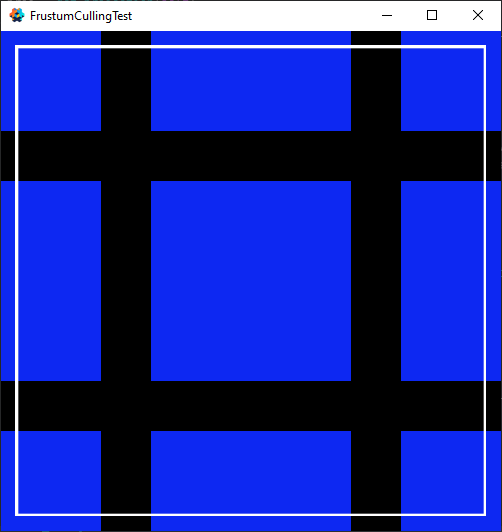 I don’t understand, did you swap the version numbers?
I’d expect the lower vertex buffer size to be in the 1.3.1 beta?

Yes, good catch, there is a mistake on the bottom picture (I will correct it)

the bottom picture is the same version - 1.3.1 beta! Comparing to my previous posts, results are way better!