We’ve also updated extension-spine and extension-rive with a minor but breaking change in the dmSDK.

It shouldn’t affect much other than you’ll get a compile error if you’re not using the corresponding version for your editor.

Awesome! I have needed each of these from time to time.

Yeah, I like how these game-changing features keep quietly popping up lately.

Just testing this version. I’m getting this Internal Server error for both extension I’m using. Any clue?

The rotating tiles and setting masks and groups at runtime are big ones! Is tile rotating supported by the editor, or just code? 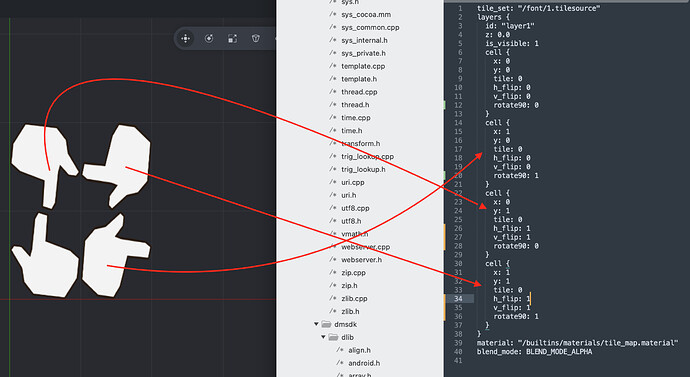 This comment may be useful for ppl who wants to make exporters from tile editors into Defold tilemap
We don’t use transformation matrix for each tile, 3 bits is enough to record 16 (but 8 unique) states that combination of FlipH, FlipV and Rotato90 gives.

Just testing this version. I’m getting this Internal Server error for both extension I’m using. Any clue?

Which extensions? Can you confirm which build server you are using? And your editor version?

I’m on a Macbook pro with Apple Silicon. OSX 12.1
Everything was working with 1.2.190. I’m always on the beta channel

I had missed to update a few environment variables on that darwin server. I’m on it and expect it to be fixed soon.

EDIT:
The Darwin beta server has now been updated and should be working again.

All working now, thank you!

Reporting this here but also on github.
When the console is hidden the autocomplete menu appears not where the cursor is.

Checked #6142 (black screen flashing after a launch screen on iOS) and, unfortunately, it’s not fixed.

Yeah I second that, I still get the back flash on iOS. On desktop it’s working although I tested on osx only.