This interim release was planned in order to support iOS 14 as soon as it came out.
We’ve also taken the opportunity to fix some issues regarding the AAB bundling for Android.

Since it’s a brand new major OS version, we’d like some help from the community to test that it works as intended. E.g. building properly and running on the devices (old and new).

We’d also like you to test and verify that the AAB issues have been fixed and are working again on all platforms (osx, win32, linux)

I’m getting Internal Server Error when I try to build any project that uses DefOS on 1.2.174:

I try bundle android and had this error:

i didnot put keystore bec like keystore i made from manual i did not have a txt with password , or do not know how create the syntax of it

Are you using the latest beta?

yes now i used the new beta thanks

and i had the above error from bundle android

And have your changed to the beta build server (build-stage.defold.com) in editor preferences?

Can you also share what it says in Help->About?

And have your changed to the beta build server (build-stage.defold.com) in editor preferences?

Can you also share what it says in Help->About? 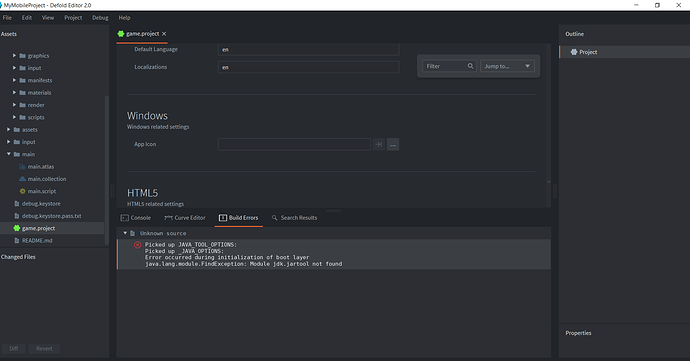 i done debug bundle with debug.keystore and debug.keystore.pass.txt and has saw the same
error
unknown source:
Picked up JAVA_TOOL_OPTIONS:
Picked up _JAVA_OPTIONS:
Error occurred during initialization of boot layer
java.lang.module.FindException: Module jdk.jartool not found

Ah, could you please download a new beta instead of updating the existing one?

ok i will download a new version of beta thanks , do i need change the preferences of server again? thanks

ok i read up need change server as you said before

Ah, could you please download a new beta instead of updating the existing one?

nice i open in mobile but not work normal now must do changes… instead start at logo start in other screen and is stuck cant press sth. Was at middle seem ok i think but was stuck. Do i must rebuilt all in different
resolution? or can sth be done with render? nice first joy now sadness i have a road ahead nice is in pc
works normal with joystick also

We’ve tested with a few different projects with and without extensions and so far everything seems to finally be back on track and working, BUT we would also appreciate if you could test with your own projects and report back to us if something isn’t working in the bundling process.

Issue-5216 - Fixed : Android: Back button doesn’t shut down the app

I’m not sure if this is the latest release of the beta that is causing the following error.

Not sure that is going on here.

@vnieu which version of Defold (share Help->About) are you using? Can you also confirm that you are using build-stage.defold.com in editor preferences?

I’m using version 1.2.174 beta channel.
I’ve just set the build server to https://build-stage.defold.com and now it just says ‘Ready’ at the bottom left corner when I try to build.

I’ve just set the build server to https://build-stage.defold.com and now it just says ‘Ready’ at the bottom left corner when I try to build.

No error or any progress indication? Try cleaning out your build and .internal folder in your project and try again.

It builds but only when the native extension in the game.project is empty but when I attach the .appmanifest is does not build.

Can you share (bjorn@defold.se) a complete and minimal example project where bundling doesn’t work?