I want to share the progress of our humble project. This is an interactive story about the cat who tries to reconcile his quarreling owners. This is a hobby project that we do as a small team in our spare time: me, the writer, and the artist.

Due to the fact that the game is being worked on in a comfortable lazy mode, it is too slow. But nevertheless, we want to release a public demo in December. If it goes beyond the demo, I think there will be the English translation as well

I made a sort of adaptive layout by using node modes and the safe_area extension:

Debugging Ink environment variables is very necessary in these kinds of games for the writer: 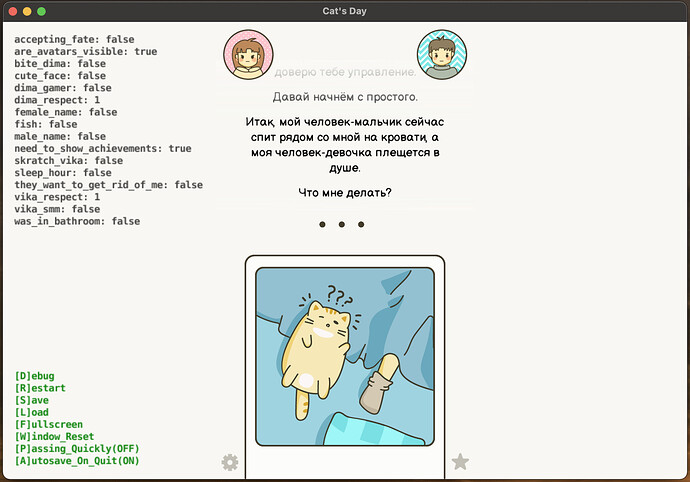 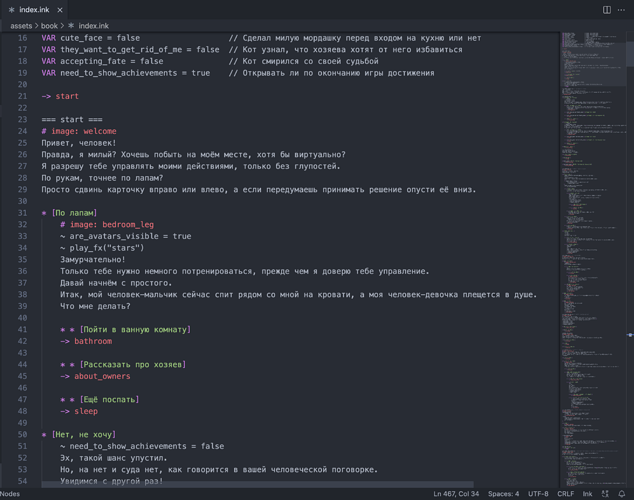 The libraries we use are monarch, druid, safe_area and defos.
Also we use Ink to write the scenario and narrator to play it.

Looking very good! Based on text, I suppose there will be decisions?

Yes, to make decisions the player moves the card in the tender (reigns?) style, with the only difference being that it is possible to choose from more than two options (3-4-5+?!).

The plot and the ending depend on the decisions made, and the avatars reflect the current respect level of the owners to the cat

In the future I’ll try Rive, but right now breathing is the scale and position animations of certain parts of the face.

Looks cool! Congratulations! If you will have English version I want to try it! Are you going to share with ads or a paid game?

The demo version, of course, will be free. The full version - I do not know yet, but it is quite possible it will remain a non-commercial project, just a showcase item.

Our current goal is to gain experience, establish a process, and set the stage for further, more solid games as products.

Well, we prepared a public build of the game for testing

Personally, I consider this is a prerelease version. The soft shapes are already soft enough, smooth animations are smooth enough, well, maybe a couple of bugs can be found. Of course, we are talking about a demo release, we don’t have content for the full game yet.

The purpose of this build is to get feedback using the Google Forms, to understand if it’s worth continuing this story. And also to refine the game mechanics, hear things we didn’t know about, and move on.

There is an iOS version in Testflight, an Android version as an apk file, and an online HTML5 version. But I recommend playing the mobile version because of the UX.

Yes, it’s still a game in Russian. And I have no idea how to translate it, because of the twists and turns of the Ink script.

This is one of the nuances of scripting languages for interactive literature: the more twisted and functional the language and script is, the harder it is to translate and maintain it.

I know only two ways to do this:

But you can still touch the pictures, listen to the music, and immerse yourself in kawaii

Released Cat’s Day to the App Store and Google Play. 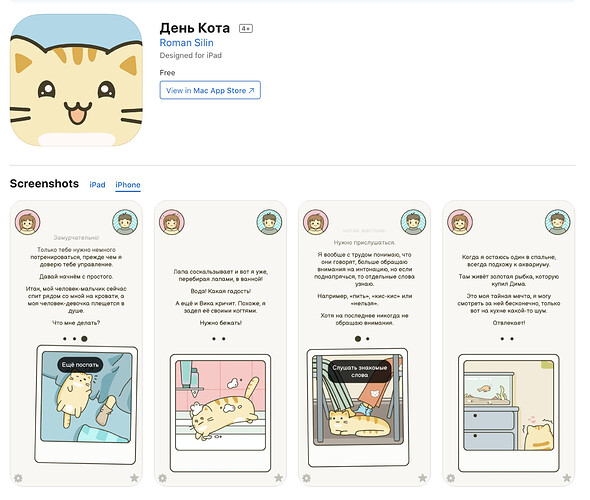 Many thanks to the team for not abandoning the project and being able to bring it to a solid demo release.

For the cute scenario — thanks to Vladimir Maximushkin.
For these wonderful cards and kawaii illustrations — thanks to Irma Kundraite.

Whether there will be a sequel is a good question. Let this game have no illusions about monetization, but a sequel is possible. And it will turn out to be a consequence of two factors - good reviews and hobby-fuel