Thank you! I’ll probably publish the winnable-shuffle bot code in the future but I want to make a cleaner, more clever version first. 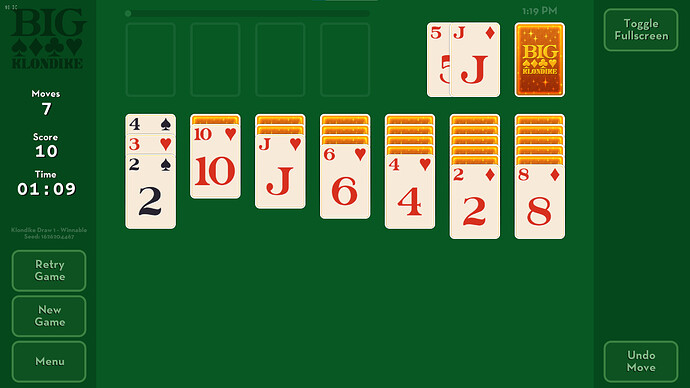 One thing regarding feedback @Pkeod - is it possible to make timer stop when the Klondike window has no focus? What about fullscreen, but I change focus with Alt+Tab? 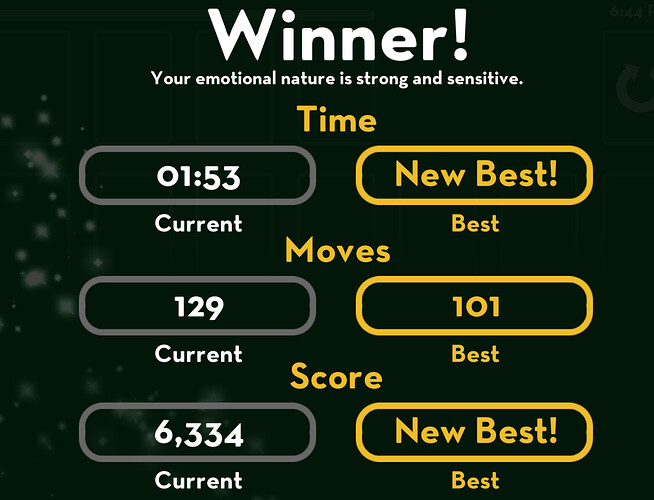 is it possible to make timer stop when the Klondike window has no focus? What about fullscreen, but I change focus with Alt+Tab?

There is a setting in options you can enable which will auto-pause the game when window focus is lost. Would that be good enough, or do you think it should just not tick up timer when the window doesn’t have focus?

Some release stats! They are not unsurprising in the least.

This may be financially worth doing in the very long term but probably not. Still need to release mobile versions but other things have been having more priority. 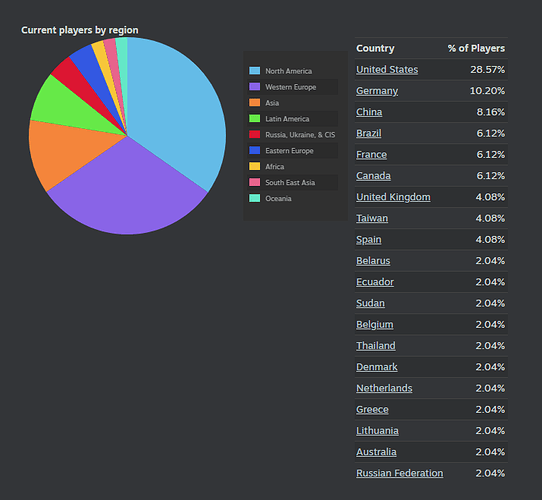 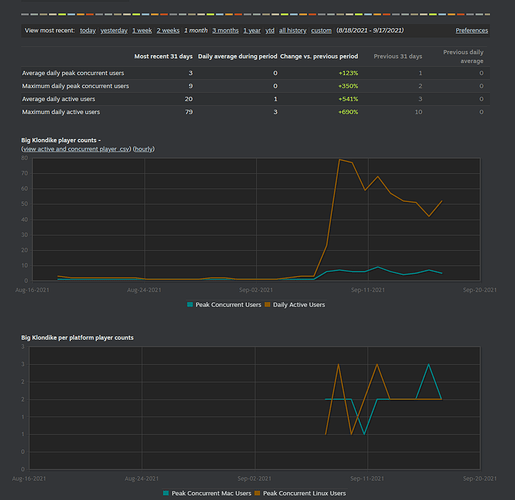 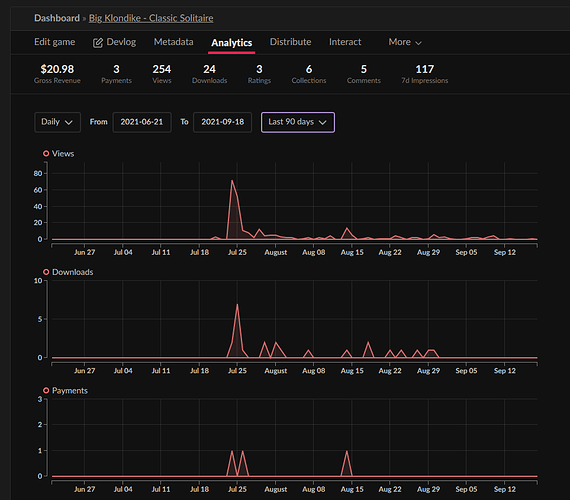 Would that be good enough, or do you think it should just not tick up timer when the window doesn’t have focus?

That is good enough! It could be even enabled by default 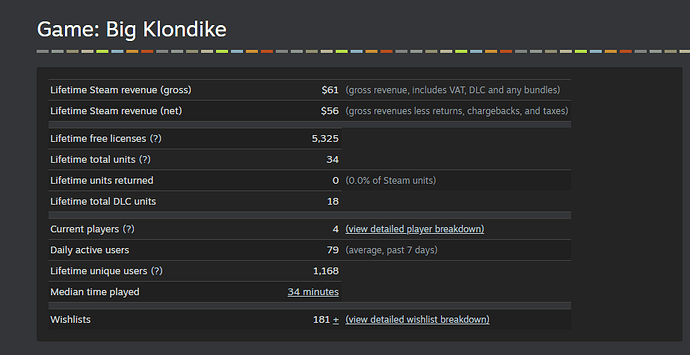 In the next update we’ll be adding Vegas scoring mode which will be fun. We’ve mostly been focusing on Dire still but once Vegas scoring is in we’ll finally release BK on mobile.

We’re looking at doing a similar treatment for FreeCell next in the future too.

Shockingly Steam users are harsh when they review games and stingy with reviewing games, which has led Big Klondike to having now a mostly positive rating on Steam. If you’re reading this please consider trying the game on Steam and giving it an honest review.

Every game on Steam can always use more reviews so while you’re at it go review other games you love that are on Steam that you have not reviewed yet. Even a simple one sentence review is useful! Valve doesn’t allow devs to ask you to review in game so it’s a real struggle to get past certain review total thresholds which enable various things on the platform. There are milestone thresholds like 100 total reviews, 1,000 total reviews where your game is simply not allowed to achieve the best possible rating of overwhelmingly positive if they don’t reach those totals. 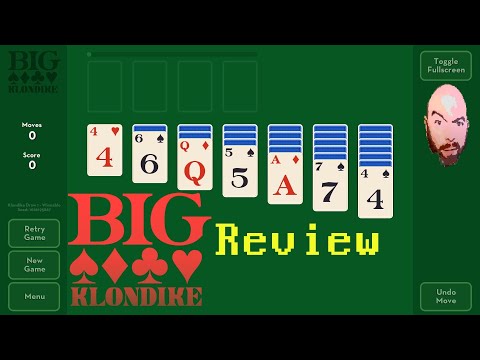 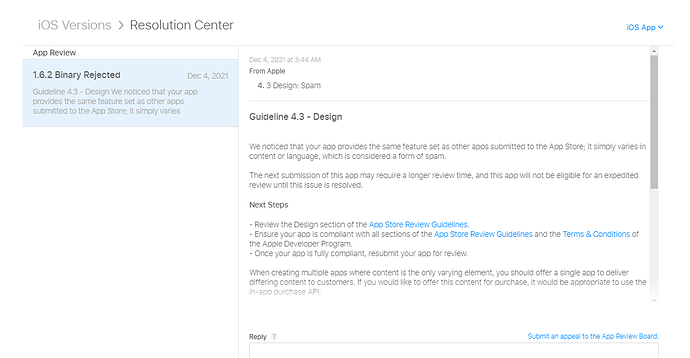 What. Om my god. What they are saying is that the first developer releasing a Klondike game is the only one allowed to have a Klondike game on the app store. Any other version is considered spam?! That’s bullshit.

4.3 Spam
…avoid piling on to a category that is already saturated; the App Store has enough fart, burp, flashlight, fortune telling, dating, drinking games, and Kama Sutra apps, etc. already. We will reject these apps unless they provide a unique, high-quality experience. Spamming the store may lead to your removal from the Apple Developer Program.

The above is the partial wording from Apple’s guidelines. Whilst it’s perhaps understandble they wouldn’t want low-quality apps such as the types listed above, Big Klondike is a high-quality game and labelling it as ‘spam’ is ridiculous and inconsitent with Apple’s own guidliness. Solitaire remains one of the most popular games in the world, as it has been for decades.

Without wanting to start an Apple hate thread, I do wonder what is going on over there. They seem to show contempt for their users and developers alike. 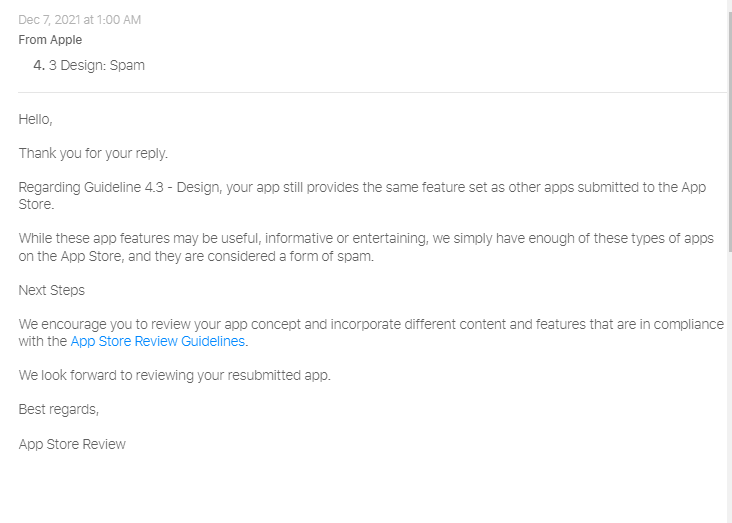 Update from Apple. I’m not sure what to add to Big Klondike that would not diminish from the whole. Cynically I think I know what I could add to make them allow the game in, but I’d still worry even if we put money and time into making a lot of character art, adding a battle pass, and other meta game content to lessen the focus on making the best Klondike version ever, they would still reject it.

that is awful.
I think they don’t want another Solitaire in their store, even though there aren’t that many of them (I just had a look). I have an inkling that adding more features to your game won’t change their mind. Before you put money into it, I guess you should ask them.
The whole wording of Guideline 4.3 @benjames171 has posted above is so offensive, how could this ever pass an editor?
So sorry for you.

Btw: I played your game and I think it is awesome.

They are definitely not playing the game, but looking at the game thoroughly… I don’t know what you asked them already, but would a UI revamp be meaningful to them? Maybe you could add some reviews from Steam or so? I have so much great time in the game, I could be a counsellor here

Now got this e-mail.

The status of your app, Big Klondike, is now “Ready for Sale”. 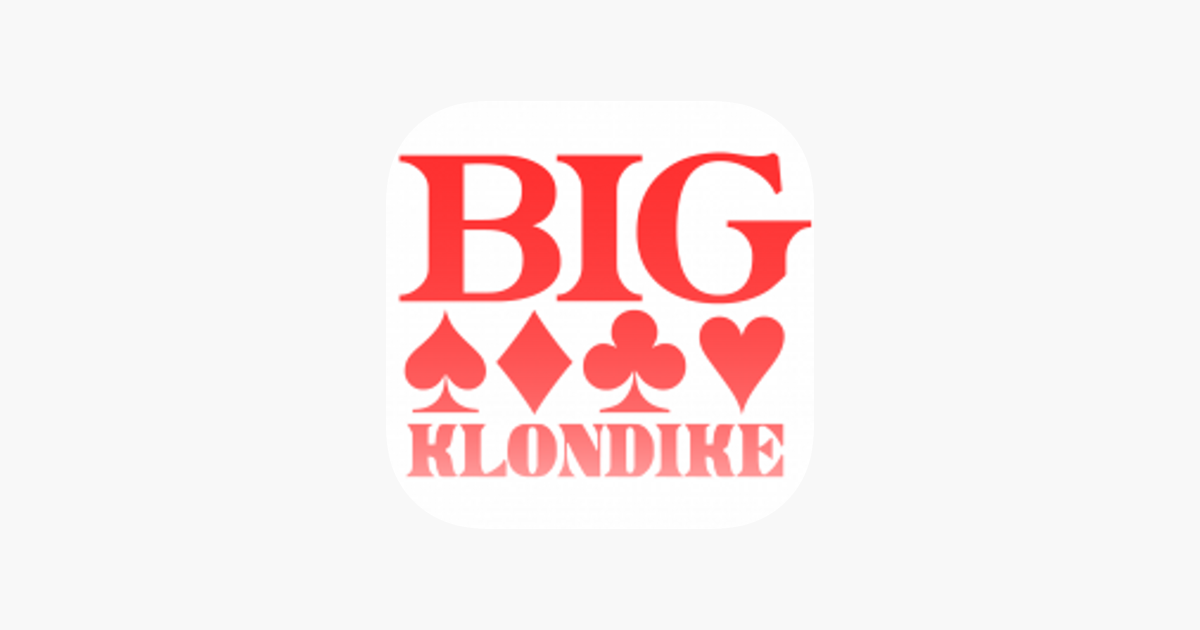 ‎Big Klondike features Winnable and Random deals. Our Winnable deals have been tested by an advanced artificial intelligence to actually be possible! If you want completely random shuffles untouched by AI you can play with Random deals enabled....

I guess then the appeal did go through successfully even though they also sent an e-mail today that it didn’t?

Promo codes to get this version for free. I decided to make the iOS version premium because I didn’t want to have any IAP in it even if it was optional cosmetic one. Steam/Android versions will keep getting more IAPs for cosmetic stuff eventually but iOS version will have everything in the single premium price.

But anyway, congratulations then and good luck!

That is great, congrats! These review processes are very mysterious and slightly bizarre. Amusing even, if you aren’t at the receiving end.

1.6.3 adds Spanish translation thanks to @Pinchazumos !

This version adds a Spanish translation thanks to Pinchazumos. You can change the current language by clicking "EN-US" on the main menu. Big Klondike has a relatively small amount of text. If you would like to contribute a translation of your native...

I’ve pulled the iOS version since it was the only fully premium version and it also had zero sales. We will make it live again after making it F2P like the other versions. I was hoping it wouldn’t be necessary to do F2P on iOS and just have every IAP/DLC ever be part of one low price but there’s just too much F2P competition to make the kind of game BK is currently to be viable enough.

We are also making some plans on changing direction with BK. We’ll be making these kinds of changes: