feature.png1024×500 584 KB
Hi everyone! Apple Spider is my first release-worthy project in Defold, and it’s been a great experience so far.

The general idea: Spiders are taking over your apple orchard, so you need to fight them off. Throw apples to smash them and make Apple Spider (like apple cider… I know it’s a terrible pun, but I’m a dad

). Spiders appear on-screen in random spots. The speed of generation increases as you level-up. You have a few styles of attack (hand, package, and gatling gun), and some special items to help you (rain and bug spray). 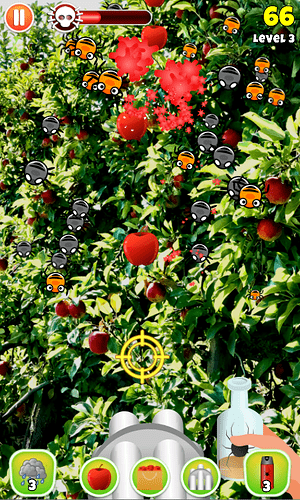 I suppose it’s a casual arcade game? This evolved from me joking around with a clicker game concept, and gradually adding more complexity until it seemed fun.

I’ve spent many hours fine tuning the difficulty progression, and designing the scoring system to encourage some strategy. For example, there are bonuses if you do not waste any ammo.

What I’m liking about Defold (compared to LibGDX):

Challenges so far with Defold:

Looking great and fun! The only thing that comes to my mind now is that the background is not in the art style of the rest and if you don’t want to change that, it could be good to at least blur it a little bit or tint it, so the rest of the game is in contrast

I appreciate the feedback!

The background is an interesting topic, actually. I apologize if I get long-winded here, but maybe someone wants to know how the sausage is made.

The first prototype that led to this game was a simple clicker, where you threw toilet paper at a photo of a crowd. I really like mixed media art, and contrasting cartoon graphics to a real photo felt right to me. Eventually, I added viruses that you threw the TP at, as if the hoarders thought they could stop the virus if they bought enough toilet paper! Of course that idea was banned by Google & Amazon for violating their “sensitive events” policies. Tech giants do not have a sense of humor… 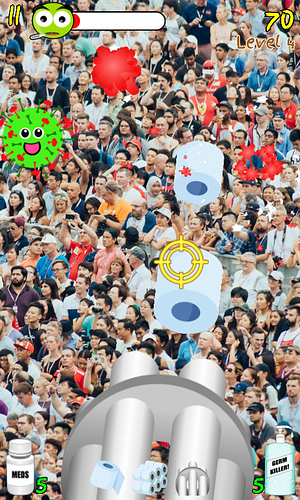 After those policy rejections, I pivoted the subject matter to squashing spiders since it might appeal to a larger audience. After few adult beverages with my wife, we landed on “Apple Spider”, and I loved it

Keeping the spirit of the prototype’s art direction, I found a great apple orchard photo on Unsplash, and messed with the saturation & levels in GIMP to make it stand out a bit less.

One upside is that the photo background makes it harder to see some of the smaller spiders, so it adds a tiny bit of challenge. I worry that blurring it will change that, but I will definitely give it a try.

Long-term, it might be neat to replace that photo with more of a live background, with rustling leaves and other details. Maybe some day I’ll have the time and energy!

Nice work! To continue on the background topic, my concern would be that while visibility might be an added challenge, it risks being a challenge that doesn’t feel good or fair. I would liken it to intentionally adding a delay between clicking the mouse and the intended consequence of a click - it would make it harder to aim (or whatever the action is), but I think most would describe it as “poor usability” that just feels bad/wrong, rather than see it as a genuine design choice.

I think your idea about adding movement to the background (e.g. rustling leaves, like you say), would have the effect of short-circuiting our in-built movement detection system, and in my opinion would achieve your goal of having the spiders be difficult to detect in a way that feels legitimate to players.

Great points on usability (and in effect, accessibility). I really appreciate all of this advice.

I’ll likely start prototyping some background changes in the coming days. In addition to the animation, it could be fun to add layers as well.

I was able to spend a few hours on the game today, and prototype a new background/play area design.
Most of the time was spent drawing somes leaves in Inkscape. I enjoy art, but it sure is time consuming!

First I simply tried blurring the background and adjusting the “curves” to make the game objects stand out more. I’m not a big fan of how it turned out on its own, since it makes it too easy to see the spiders. 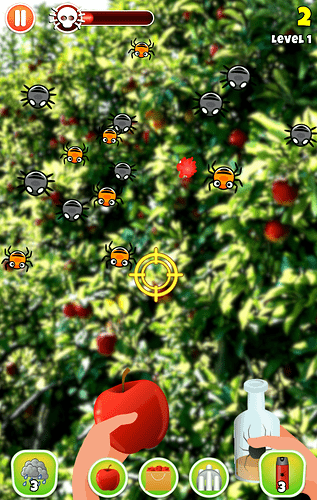 The next iteration was to randomly scatter some leaves & apples around the edges of the screen. The z-index is also varied, so roughly 10-20% of the leaves with cover a spider if it crawls underneath. I’ll need to develop a more advanced algorithm to place the foliage, but I’m liking where this is going!

Prototype with leaves & apples around the edges: 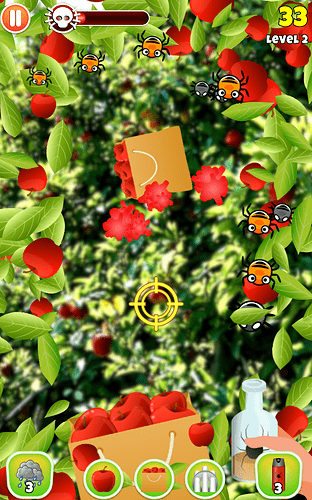 Not sure if this is any better, but I’ve made some adjustments to the foliage placement algorithm. It’s very likely that I will end up spending way too much time on this.

On init, some layers of leaves & apples are generated. Not sure if it’s super obvious in the screenshot, but the placements follow a curve along the edges, to frame the scene.

The top layer of leaves have a z-index greater than the spiders. This gives them small areas to hide as they move around. 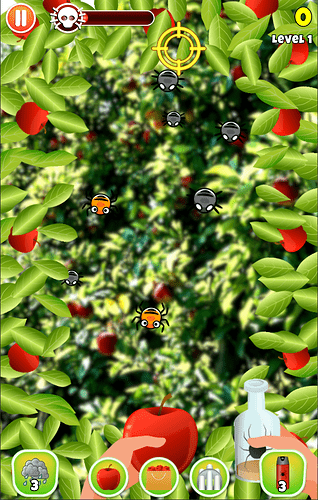