That’s way there is 4 tutorial missions) To show gradually and explain everything as well.

Welcome to the shortest devlog so far)

I have finished new build for two events which are coming this july, so it was mostly polishing and bug fixing. I will take part in WHITE NIGHTS SUMMER 2020 and in GTP Indie Cup. So i will probably release new trailer next week, as i will create it anyway for these events.

And a lot of changes coming to the core gameplay and UI\UX. Lengthy play session revealed several flaws which must be addressed to create more interesting and fun game. So stay tuned)

Also this week i tried @Denis_Makhortov system to check if we clicked on transparent part of sprite. But i have to rewrite some parts, because i need it for continent selection in Sandbox menu, which built with gui sprites and not with game objects with sprites. Anyway it worked, but i’m not still pleased with the results and probably will use more simplified image for generation.

That’s all for today. See you next week

but i’m not still pleased with the results

Could you write in more detail? Not perfect accuracy? If so, then I think you need to set the compression to 1

Sorry, I probably didn’t put more context) It worked too well, I used compression 1. Problem is in images themself. North America for example, has very complex shape with small island and parts. And when i hover over it, it often jumps form selected and not selected. So i wasn’t pleased mostly in this)

The algorithm itself is very nice, thanks. 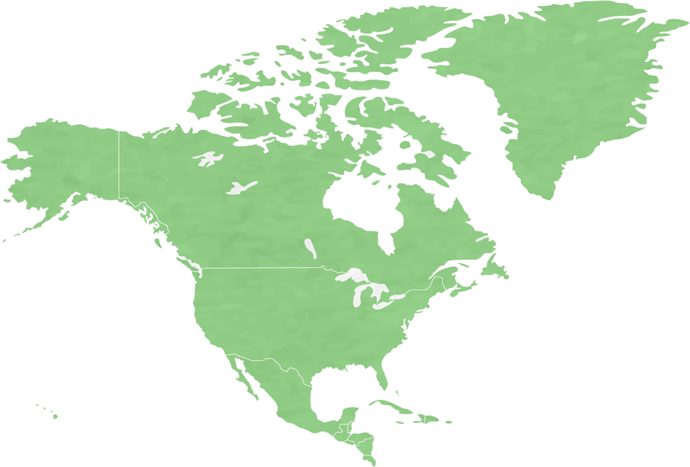 I will probably fix it, by using different images for generation, like this 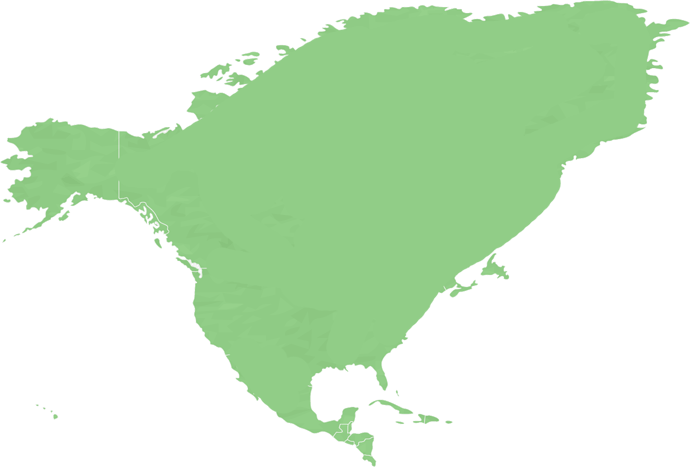 Welcome to even shorter devlog)

Today i have for you a gameplay trailer, which is based on latest stable version. Work is still in progress)

And that is pretty much it) Things that i am working on right now is still in early stages, so i will talk about them in next devlogs. See you there.

It’s friday and time for another update

Some changes were made to Campaign menu. On one hand i had troubles animating reveal of missions nodes. Mainly on idea stage, like from which direction and how that reveal fits in other menus and animations. On the other hand Briefing menu, which shows after you started mission was a little bit misleading and almost duplicated Tasks menu. And after last playtest i came to a decision to remove briefing screen and move everything from it to Campaign menu.

This is how it looks before: 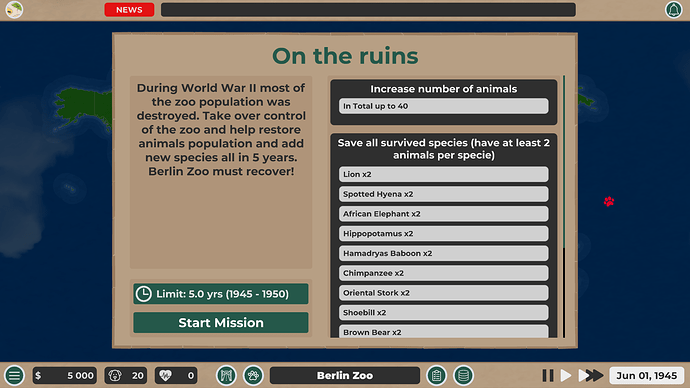 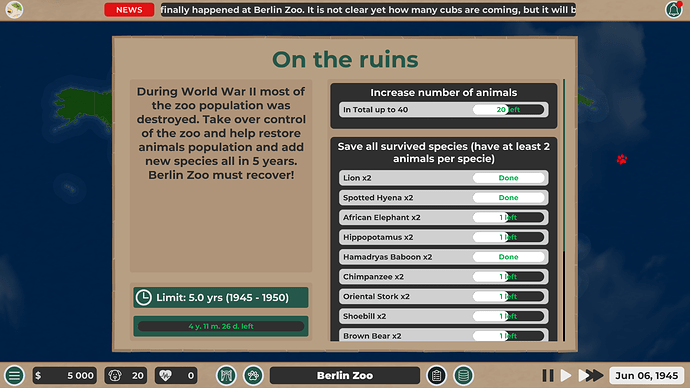 And this is new Campaign menu. I dunno why i created briefing menu in a first place, cause its really strange idea to show mission details after you have already started mission 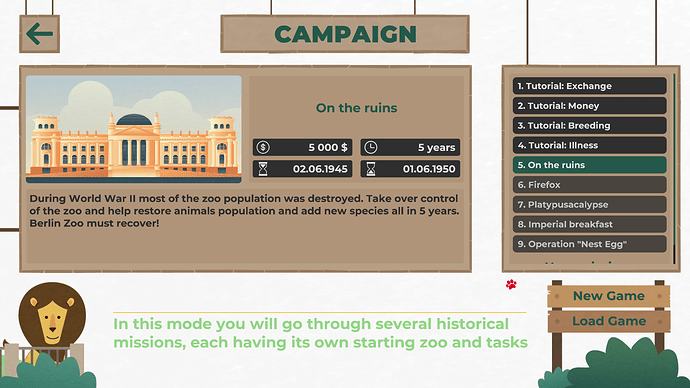 I’m not entirely happy with the end result, so i’m sure that i will change it again in a future.

hi @russelkgd I would love me to have some more comments of ideas at my dev diary but is ok that I see people of community put likes and visit my thread. As for your last idea. In my opinion you can leave the campaign like you done now. And briefing to be in a menu inside the game for example as tasks left to be accomplice and let know the player what you ask him to do for complete the level. I do not know if you have such menu inside, in your demo I do not remember right now but if you have then keep it. Also in campaign could mention under in details for example under the letters of mission. " more … " where player can press and see details just of a small briefing in text not so big briefing as before. thanks I hope that maybe take account some things for your game.

Also even if your game has as currency the animal, you could add as second currency the money for expenses of the zoo example food or payment of salary or income of tickets . So to make player to do more things.

also does this is from your page in steam? what is the process to publish a game ? thanks

I’m speaking more from design perspective that i will change campaign menu again in the future. Thanks for your ideas) Player can see all tasks in Tasks menu, i just removed “duplicate” for campaign missions.

I have already second currency to increase zoo capacity and “cure” ill animals. Later it will be used more, like to do expedition and maybe for some research.

As for steam, yes it’s steam page for Zoo Economy, but it’s not published\verified by Valve yet. Regarding publishing process, you have to create developer account. It involves filling a lot of information, but mainly you have to pay 100$ to complete transformation of your regular account into developer one. This 100$ fee is paid for each game you want to publish in steam. So basically when you register as a developer you are paying these fee for your first game. On good side, you will get this 100$ back when you game sells for more than 1000$ (if i am not mistaking). Also you will fill tax form to determine your tax policy, because all money are coming from USA and if you or your company are not from USA or registered in USA you may receive double taxation: from USA and your country. To pay only one tax, you will need to fill that form.

So it’s better to do it when your game are more or less ready or you 100% sure you will finish and release the game.

After successful creation of your developer account you can prepare build and page for your game, there are checklists to complete, so its’ pretty straightforward. 30 days from your payment you can submit game to Valve, they will check everything and after that you can publish game page and everyone will see it in store. Then when ready you can publish game itself to people to buy.

thanks @russelkgd for this info as I didnt know the process as I never publish anything and is good to know such details for future. Something more in expedition you can find an animal for cure or to raise and protect for example if an event is that illegal hunters killed the mother of baby elephant but you manage to rescue the baby.

Also you can put an event of letting free an animal to jungle and this make the zoo more known to media. or give an effect to zoo to can trade one month will lower prices with others.

thanks and keep up the good work

Thanks again for your suggestions!

Expedition will be just to find unique animals in the wild. As for the rescue, illegal hunters and etc they all be as separated events.

Also one of the missions in campaign will just about releasing animals to the wild. It is current breeding program in New Zealand, where they raise qiwi and then release them to the wild to increase qiwi wild animals population. But i will consider this as another gameplay mechanic.

It’s friday and another devlog

. Mostly i needed fade in and fade out and random shuffle feauture. Fade in and fade out was already implemented in first version on my music controller, so i created random shuffle and rewrite some parts of code. Firstly i searched in audio native extensions, but could not find any suitable solution for my case. As an inspiration for controller structure i used Debeat.

Save system
I previously mentioned that save\load system is in work and it almost ready. I have to figure out some small staff which is not working after loading, but i hope to finish it this week. Ofcourse i use DefSave for that purpose and initial idea of storing save data was discarded, when i notice 512kb limit on files.

Initially i wanted to have one save file with all data. First tests with just save\load menus and their logic were fine. But when i started storing real game data it quickly got out of control. More zoos -> more animals -> more data to store. And each “save” can range from 9kb to 200kb (it will be more in the future). In second idea i have one control save file, which stores information about real save files, like savename, game mode etc. When player select file to load, it will load correspondent real save file from disk. But this approach have on disadvantage (except increased complexity) - i could not find way to delete real file from the computer. That why i just delete all data from it and save it on disk, almost empty. Will be glad to hear some ways of deleting

. It’s not gamebreaking, but better to delete it than leave it there. And it is possible to rewrite save files. Probably will include option to name and rename save files, but right now it is not essential. 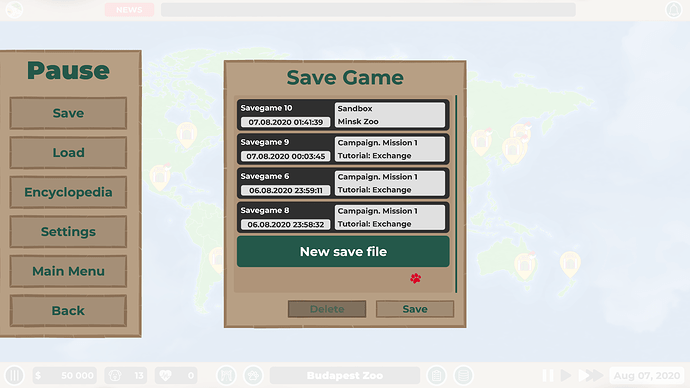 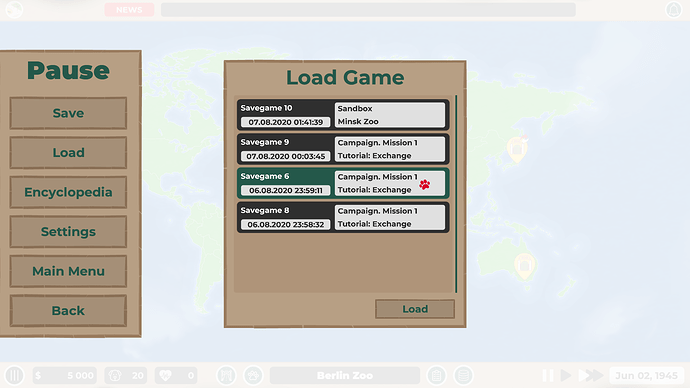 And that’s all. Stay safe. Come back next friday for more.

If it is a normal file on disk os.remove() should work.

As for size of save files couldn’t you have your save data in JSON format and use https://defold.com/ref/stable/zlib/#zlib.deflate:buf and then save using normal io.* functions?

can i ask sth why you want to delete real file? if do the save in same will not rewrite? or you mean difference to start new game or start a load file because i had an issue with this but i think you can have for new file a default saved files with values. I think defsave.default_data does this check inside lua of defsave is written. If i am wrong maybe @Pkeod that wrote it can tell us a solution. Thanks

Because player can delete save file) I mean if for whatever reason he wants to do it, he can. And after deletion the file is empty but left on the player’s computer like garbage.

I will try solutions from @britzl and report what worked. And default_data is for initialization of empty loaded file (like not existing in a first place), but i want to delete file)

ah so you want complete deletion when the player give such order through game.

you are advanced me still do the save and load at news sim to work, you even thought deletion by player. Ok keep up the good work I liked this you mention for music too. Thanks