In this version we’ve set the supported OpenGL version to 3.1+ (previously 3.3) for Linux and Windows. Note that this version is for the engine, not the editor.
Hopefully, this will improve the support for some users having issues.

For Android, the build server now also uses d8 instead of the old dx command. This should be both a little bit faster, and also produce a smaller .dex file.

We’ve also optimized the font renderer which will be good for the more text heavy projects.

Another great optimization is for the mesh components. They will no longer upload their vertex buffer each frame, but only if the buffer is modified. The Native Extension api got the new dmBuffer::GetCOntentVersion()https://defold.com/ref/alpha/dmBuffer/#dmBuffer::GetContentVersion:type-version) and dmBuffer::UpdateContent.

We are currently working on a long running task on adding pipeline extensions.
As part of that, we’ve added two more apis to our dmSDK:

The component API will let you create a new component type, with the same life cycle functions as our in game component types.
To register such a type, you’ll also need to pair it with a resource type.

Note: We haven’t started documenting these yet, but we’ll do that as the task progresses.
In the meantime, you can look how we use these apis in the engine at
res_script.cpp and gameobject_comp.cpp

As mentioned, this is part of a long running task, and we might need to change the api’s somewhat in the near future, although it’s not very likely as these are old api’s that we’ve used internally.

I am getting this error in the editor console using .181 beta on Windows 10.

Can this be safely ignored?

I am getting this error in the editor console using .181 beta on Windows 10.

When does this happen? When you download something using http.request()

When does this happen? When you download something using http.request()

Yes that seems to be the case. Upon further investigation, I get the error in these cases:

Thanks. The error can be ignored, but we should probably remove the log.

What happens is that the client receives a 200 OK response from the server and tries to cache the response, but the response does not include an ETag and no Cache-Control: max-age= response header.

There should be no http cache involved in WebSocket connections.

Tracked by this issue: https://github.com/defold/defold/issues/5685

Thanks on improving font resources/rendering! Awesome to see optimizations like this.

Hi guys, currently, I’m testing v1.2.181 on MacBook Pro M1. I’m building sample mobile application and it works fine, but when I connect my android phone and try to build it, I got the errors:

Interesting. @JCash what do you think this could be?

I’m building sample mobile application and it works fine, but when I connect my android phone and try to build it, I got the errors

I assume you are using the 1.2.181 Beta since you are making a post in this thread? If so, please also make sure your editor is configured to use https://build-stage.defold.com in Preferences.

I’m using dmengine.apk, choose the phone as a target and build.

Wow guys, sorry, I found the issue. I used old version of dmengine.apk, with a v1.2.181 it works fine. Build from bundle android app works as well. Thank you for help.

Does Defold use the build server to build locally?

We use the build server to build the engine if you have native extensions or an app manifest.

That’s me again with a new issue)

Currently, I’m trying to create a bundle that can be uploaded to the Google Play Store. Tested on a sample Mobile Game project. 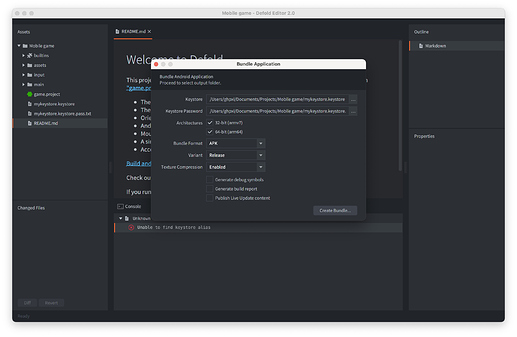 Build using bob.jar from http://d.defold.com/beta/ works fine (but only with java for intel architecture)

I wanted to test (Windows 10), but in live-project with a lot of extenstions, I got the error:

the build server also is updated to https://build-stage.defold.com

but in empty project beta

If the project has no native extensions it will use the pre-built engine that ships inside bob.jar and the editor. The problem you got was because you had native extensions and we built a custom engine for you. And apparently there’s some kind of problem either with the combination of extensions you have or just the fact that the build happens on the build server (more likely).

I had missed updating a file with the new transcoder library info.
I’ve now pushed that fix and I’ll update the links (in the other thread) as soon as it has built.

Note: This feature is actually experimental, and not even in on the alpha branch yet, since I need to cleanup some code still

@Mathias_Westerdahl now all works! Thanks for fast fix!